Researchers at Cornell University have developed an algorithm designed to visualise models of the universe, showing predictions of what patterns would look like in different universes. A development that would help solve some of physics' greatest mysteries. 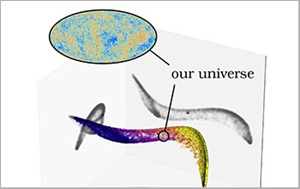 The algorithm was developed by applying scientific principles used to create models for understanding cell biology and physics to the challenges of cosmology and big data.
"Science works because things behave much more simply than they have any right to," said physicist James Sethna. "Very complicated things end up doing rather simple collective behavior."
Sethna is the senior author of "Visualizing Probabilistic Models with Intensive Principal Component Analysis," published in Proceedings of the National Academy of Sciences.
The algorithm, designed by first author Katherine Quinn, allows researchers to image a large set of probabilities to look for information that might be useful, and provides scientists with better intuition for understanding complex models and data. Michael Niemack, a co-author of the paper and an NSF Career awardee, is developing astronomical instrumentation that will use the algorithm to study the characteristics of the early universe, says an NSF release.
"We need better algorithms that can extract what we're interested in," Quinn said. "We can't just say, 'Look for interesting universes.' This algorithm is a way of untangling information that can reveal the interesting structure of the data."
"What stands out about this algorithm is its general applicability," said Daryl Hess, a program director in NSF's Division of Materials Research, which provided funding for the project along with the Division of Astronomical Sciences. "Ideas from different fields -- information geometry, physics, and biology -- were combined to create this tool enabling insights into complex data."
MORE REPORTS