Huge reservoir of liquid water detected under the surface of Mars

Providing resolution to a decades-long debate over whether liquid water is present on Mars, researchers using radar to probe the planet's polar ice caps have detected a lake of liquid water under the Martian ice. 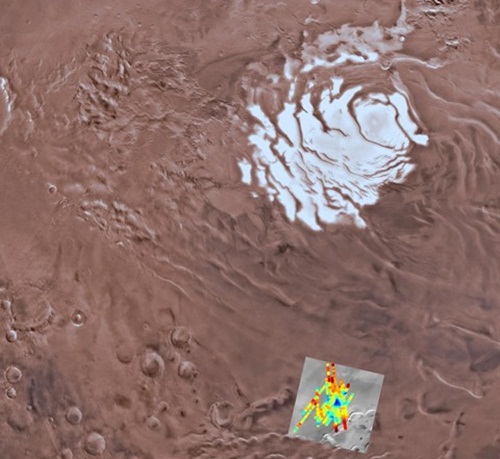 Colour mosaic of a portion of Planum Australe deep blue corresponds to the strongest radar reflections, which are interpreted as being caused by the presence of water / Image: USGS Astrogeology Science Centre, Arizona State University

The water body stretches 20 kilometers across, they say. The detection was made using the Mars Advanced Radar for Subsurface and Ionosphere Sounding (MARSIS) instrument on the Mars Express spacecraft. MARSIS sends radar pulses that penetrate the surface and ice caps of the planet, then measures how the radio waves propagate and reflect back to the spacecraft.
Reflections off sub-surface features provide scientists with information about what lies beneath the surface. Between May 2012 and December 2015, Roberto Orosei and colleagues used MARSIS to survey a region called Planum Australe, located in the southern ice cap of Mars.
They obtained 29 sets of radar samplings, mapping out an area exhibiting a very sharp change in its associated radar signal, about 1.5 kilometers below the surface of the ice and extending sideways about 20 kilometers.
The radar profile of this area is similar to that of lakes of liquid water found beneath the Antarctic and Greenland ice sheets on Earth, suggesting that there is a sub-glacial lake at this location on Mars.
Although the temperature is expected to be below the freezing point of pure water, Orosei et al. note that dissolved salts of magnesium, calcium, and sodium — known to be present in Martian rocks — could be dissolved in the water to form a brine.
Together with the pressure of the overlying ice, this lowers the melting point, allowing the lake to remain liquid, as happens on Earth.
Anja Diez compares the subglacial lake on Mars to such lakes under Earth's ice sheets, in an accompanying Perspective.
MORE REPORTS