A project led by the Max Planck Institute for the Science of Human History has discovered a fossilised finger bone of an early modern human in the Nefud Desert of Saudi Arabia, dating to approximately 90,000 years ago. 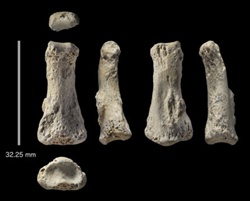