Is there life adrift in the clouds of Venus? 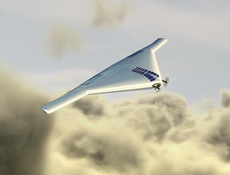 This is a a Venus Atmospheric Maneuverable Platform, or VAMP. The aircraft, which would fly like a plane and float like a blimp, could help explore the atmosphere of Venus, which has temperature and pressure conditions that do not preclude the possibility of microbial life. /Northrop Grumman Corp

In the search for extraterrestrial life, scientists have turned over all sorts of rocks.
Mars, for example, has geological features that suggest it once had — and still has —subsurface liquid water, an almost sure prerequisite for life.
Scientists have also eyed Saturn's moons Titan and Enceladus as well as Jupiter's moons Europa, Ganymede and Callisto as possible havens for life in the oceans under their icy crusts.
Now, however, scientists are dusting off an old idea that promises a new vista in the hunt for life beyond Earth: the clouds of Venus.
In a paper published online on 30 March 2018 in the journal Astrobiology, an international team of researchers led by planetary scientist Sanjay Limaye of the University of Wisconsin-Madison's Space Science and Engineering Center lays out a case for the atmosphere of Venus as a possible niche for extraterrestrial microbial life.
"Venus has had plenty of time to evolve life on its own," explains Limaye, noting that some models suggest Venus once had a habitable climate with liquid water on its surface for as long as 2 billion years. "That's much longer than is believed to have occurred on Mars."
On Earth, terrestrial microorganisms — mostly bacteria — are capable of being swept into the atmosphere, where they have been found alive at altitudes as high as 41 kilometers (25 miles) by scientists using specially equipped balloons, according to study co-author David J. Smith of NASA's Ames Research Center.
There is also a growing catalog of microbes known to inhabit incredibly harsh environments on our planet, including the hot springs of Yellowstone, deep ocean hydrothermal vents, the toxic sludge of polluted areas, and in acidic lakes worldwide.
"On Earth, we know that life can thrive in very acidic conditions, can feed on carbon dioxide, and produce sulfuric acid," says Rakesh Mogul, a professor of biological chemistry at California State Polytechnic University, Pomona, and a co-author on the new paper. He notes that the cloudy, highly reflective and acidic atmosphere of Venus is composed mostly of carbon dioxide and water droplets containing sulfuric acid.
The habitability of Venus' clouds was first raised in 1967 by noted biophysicist Harold Morowitz and famed astronomer Carl Sagan. Decades later, the planetary scientists David Grinspoon, Mark Bullock and their colleagues expanded on the idea.
Supporting the notion that Venus' atmosphere could be a plausible niche for life, a series of space probes to the planet launched between 1962 and 1978 showed that the temperature and pressure conditions in the lower and middle portions of the Venusian atmosphere — altitudes between 40 and 60 kilometers (25-27 miles) — would not preclude microbial life.
The surface conditions on the planet, however, are known to be inhospitable, with temperatures soaring above 450 degrees Celsius (860 degrees Fahrenheit).
Limaye, who conducts his research as a NASA participating scientist in the Japan Aerospace Exploration Agency's Akatsuki mission to Venus, was eager to revisit the idea of exploring the planet's atmosphere after a chance meeting at a teachers' workshop with paper co-author Grzegorz Slowik of Poland's University of Zielona Góra.
Slowik made him aware of bacteria on Earth with light-absorbing properties similar to those of unidentified particles that make up unexplained dark patches observed in the clouds of Venus. Spectroscopic observations, particularly in the ultraviolet, show that the dark patches are composed of concentrated sulfuric acid and other unknown light-absorbing particles.
Those dark patches have been a mystery since they were first observed by ground-based telescopes nearly a century ago, says Limaye. They were studied in more detail by subsequent probes to the planet.
"Venus shows some episodic dark, sulphuric rich patches, with contrasts up to 30-40 per cent in the ultraviolet, and muted in longer wavelengths. These patches persist for days, changing their shape and contrasts continuously and appear to be scale dependent," says Limaye.
The particles that make up the dark patches have almost the same dimensions as some bacteria on Earth, although the instruments that have sampled Venus' atmosphere to date are incapable of distinguishing between materials of an organic or inorganic nature.
The patches could be something akin to the algae blooms that occur routinely in the lakes and oceans of Earth, according to Limaye and Mogul — only these would need to be sustained in the Venusian atmosphere.
Limaye, who has spent his career studying planetary atmospheres, was further inspired to revisit the idea of microbial life in the clouds of Venus by a visit to Tso Kar, a high-altitude salt lake in northern India where he observed the powdery residue of sulphur-fixing bacteria concentrated on decaying grass at the edge of the lake being wafted into the atmosphere.
Limaye notes, however, that a part of the equation that isn't known is when Venus' liquid water evaporated — extensive lava flows in the last billion years likely have either destroyed or covered up the planet's earlier terrestrial history.
In the hunt for extraterrestrial life, planetary atmospheres other than Earth's remain largely unexplored.
One possibility for sampling the clouds of Venus, says Limaye, is on the drawing board: VAMP, or Venus Atmospheric Maneuverable Platform, a craft that flies like a plane but floats like a blimp and could stay aloft in the planet's cloud layer for up to a year gathering data and samples.
Such a platform could include instruments like Raman Lidar, meteorological and chemical sensors, and spectrometers, says Limaye. It could also carry a type of microscope capable of identifying living microorganisms.
"To really know, we need to go there and sample the clouds," says Mogul. "Venus could be an exciting new chapter in astrobiology exploration."
The Wisconsin scientist and his colleagues remain hopeful that such a chapter can be opened as there are ongoing discussions about possible NASA participation in Russia's Roscosmos Venera-D mission, now slated for the late 2020s.
Current plans for Venera-D might include an orbiter, a lander and a NASA-contributed surface station and maneuverable aerial platform.
MORE REPORTS