Aliens are watching us but we can't see them, says new 'Zoo Theory'

Aliens exist, but they are hiding and purposefully trying to avoid contact with humans, says a new 'Zoo Theory' propounded by an MIT astronomer. The thesis is an attempt to explain why humans have yet to meet or interact with intelligent life outside the planet. 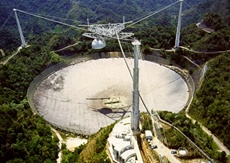 The theory, proposed by radio astronomer John A Ball who works at the MIT Haystack Observatory, says that aliens are smarter than humans, but not yet powerful enough to take over the universe, so they monitor human activity from afar.

Ball explains that they are curious enough to stop by once in a while, and that is why there are so many sightings of UFOs and alien craft, according to reports based on a paper published by him, excerpts from which have been released by the Haystack Observatory.

Ball likens these intelligent aliens to zookeepers and officers at a nature preserve who watch and monitor animals, but do not interfere with their activities. In a paper published by him, he calls these aliens extraterrestrial intelligence (ETI) and argues that their presence cannot be proven, but they cannot also be disproved. He leads his line of reasoning based on what he calls the "crucial questions".

"Why are we unaware of ETI? A premise of most searches is that ETI are trying to communicate with us, but we are not quite clever enough to see or hear them. I suggest, instead, that if ETI had chosen to announce their presence to us, we would be aware. Since we are not, I presume they have not," reads an excerpt from the paper.

He also squarely dismisses the idea of searching earth-like planets for life, saying it is akin to looking for birds in empty eggshells. Ball believes that an earth-like planet is only a good place for ETI to originate from, not exist in. The conditions that harbour life on earth that is often searched for in other planets like warmth, gravity, and air, could, in fact, be detrimental to ETIs, especially if they are much more advanced than humans, says Ball.

An advanced life form from some other part of the universe, says Ball, could be imagined to have a kind of relationship with humans on earth similar to the way mankind has with primitive earth life (PEL). Based on the time scale, he believes that the ETI to human relationship can be likened to the difference between humans and molluscs and trilobites.

"Now I can imagine talking with mammals and birds; indeed I've done it, although the conversation was on a pretty low intellectual level. But oysters? The point is that if this analogy is good for anything, then our relationship with typical ETI is probably nothing like the relationship of a primitive human tribe with technological man, which analogy seems to be in the minds of many who propose ETI searches, but instead is more like the relationship of an animal, a rather primitive animal, with mankind," he explains.

The Search for Extraterrestrial Intelligence (SETI) Institute had recently outlined a few places in the Solar System that could possibly harbour life.

Seth Shostak, senior astronomer with SETI, in an interview with Futurism said that there were "at least seven other places in our own solar system, so kind of next door places you could get to with a rocket, that could have microbial life", and added that it was likely that microbial life was found before intelligent life.

Life on earth is believed to have been formed based on carbon and other gases and materials found here. So based on the materials that are available in a place like, Enceladus, for example, it could be possible for life to form in ways that are incomprehensible to humans. It could be possible that the life exists in forms that researchers might not be able to recognise.

There is also a theory that has gained ground in recent years which says that life came to earth aboard fast-moving space dust.