Sailor teams up with researchers to make zero-carbon yacht

A British sailor is teaming up with researchers from Imperial College, London, to develop a zero-carbon energy system for the yacht he aims to race around the world. Phil Sharp is an Imperial alumnus (Mechanical Engineering, 2003) who first made sporting headlines in 2006, when he won his class in the single-handed transatlantic Route de Rhum race. 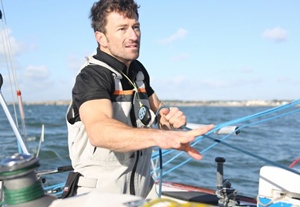 He is leading a new project in a bid to lead the first British team to victory in the next Vendée Globe non-stop round the world race in 2016.

Although wind is the obvious essential factor in keeping a racing yacht moving, the energy system - powering the autopilot, navigation systems and the water maker device that converts seawater into drinking water - is also critical for performance.

His venture, Phil Sharp Racin, will be working with researchers from Imperial's Energy Futures Lab (EFL) to design an energy system that uses no fossil fuels and is sufficiently lightweight, robust and efficient to enable the yacht to perform in the world's most challenging races.

If the team achieve their aims, this will be the first zero-carbon, fully-sustainable racing yacht to complete a round-the-world race such as the Vendée Globe. The boat will also compete in other events of the IMOCA Ocean Masters World Championship.

A round-the-world race yacht needs to be tough, self-sufficient and highly reliable in such an extreme, isolated environment. The project aims to demonstrate the competitiveness of the latest renewable energy technologies against conventional fossil fuelled systems in these challenging conditions.

Professor Nigel Brandon, BG Chair in Sustainable Gas at Imperial, and co-supervisor of the research, says, ''I am delighted to be involved in the energy systems development of such a performance driven, offshore marine project. We believe it provides a powerful opportunity to demonstrate the competitiveness, adaptability and reliability of the green energy technologies of tomorrow. The association is also inspirational for students at Imperial.''

The work on the yacht's energy system will draw on the knowledge of specialists at Imperial involved in the latest innovations in hydrogen fuel cell, energy storage and solar technologies.  The researchers will be examining the potential of a range of renewable technologies including wind, solar, and water power.

Sharp says, ''At the heart of a round-the-world race yacht is the energy system, which powers the autopilot, navigation systems and water makers.  Having a reliable, low-weight, efficient and sustainable energy system is critical if you want to be competitive in such an endurance race.  Based on initial studies carried out by EFL I believe that it is now possible to achieve these objectives effectively using a zero-emission system thanks to recent innovations.

''As part of the development we are carrying out climatology studies that look at radiation data along typical Vendee Globe routings.  Imperial researchers will feed this data into a solar round-the-world simulator in order to select the appropriate technology and optimise the positioning of the photovoltaic panels on the boat. Having the technology is one thing, but driving the maximum efficiency out of it is another.''

The team is currently putting together a community of interest and reaching out to corporate partners that can benefit from the association with a powerful innovation platform breaking new grounds in energy management.