An Australian geologist has been appointed to head NASA's search for life on Mars has become the first woman and Australian to bag the honour. 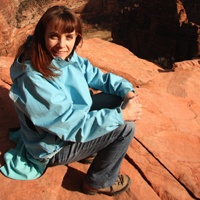 Dr Abigail Allwood of the the Australian Centre of Astrobiology, University of New South Wales, who works at NASA's Jet Propulsion Laboratory in California's Pasadena, was named as one of the world's top 10 scientific minds in 2006.

The acclaimed geologist has been named as one of seven principal science investigators in NASA's next mission to the red planet - the 2020 Mars Rover programme.

Dr Allwood, 41, told the Sydney Morning Herald that she was proud to be the first female principal investigator on a Mars mission.

She said she would also like to pave the way for other women to do the same thing.

The announcement was made on Friday for the next Mars rover - scheduled for 2020 - where scientific instruments would be sent to the planet to select a collection of rock and soil samples that would be stored for potential return to earth in the future.

The samples would then be analysed to help determine whether life existed on Mars and further inform planning for human exploration on the planet.

Speaking from NASA's Jet Propulsion Laboratory in Pasadena, California, she said she was disappointed to read about the research funding cuts in her home country.

In May, the federal government cut its funding for CSIRO by $111 million over four years.

The former Queensland University of Technology Geoscience (QUT) student finished her honours at QUT in 2002.

In 2006, she was voted as one of Australia's top 10 science brains by Cosmos magazine for her doctoral research on Pilbara rock, proving they held the Earth's oldest forms of life - 3.45 billion years old.

Allwood has been with NASA's Jet Propulsion Laboratory for seven years.

Her new role would see her lead the development of a rock scanning technology that would analyse microscopic grains of rock.

She has pioneered the development of - Planetary Instrument for X-ray Lithochemistry (PIXL) – allows NASA to study rock samples 170 times smaller than previously possible.

She explained the every Mars rover mission to date had used XRF [x-ray fluorescence] that was not ''micro'', the spot size is about 1.7 centimetres, which meant the chemistry of all the rock components was blended together over that area.

PIXL spot size is 100 micrometres - 170 times smaller, which allows analysis of the chemistry of individual sand grains, and get far more detailed understanding of rock chemistry, she added.