The Federal Reserve will coordinate with the the US treasury department a radically new initiative to jump-start the financial system even as markets around world plummeted, media reports said. 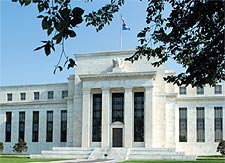 Under the proposal, the Fed will directly buy unsecured short-term debt, called commercial paper,  that finances the day-to-day activities of companies, the New York Times said.

The Fed plan, which intended to augment the flow of credit to corporates and other sectors of the economy, would amount to lending directly to businesses.

The central bank will buy short-term commercial paper issued by banks, businesses and municipalities to companies.

The total debt that these bodies owe companies totalled about $1.6 trillion as of 1 October, down 11 per cent from the previous three weeks.

The plan, if implemented, would put more taxpayer dollars at risk than the $700 billion in bailout package approved by the government.

The Fed will create a special fund to purchase US commercial paper after the credit crunch threatened to cut off a key source of funding for corporations.

The Treasury will make a deposit with the Fed's New York district bank to help set up the new unit. The central bank will also lend to the programme at target rate for overnight loans between banks. The Fed Board invoked emergency powers to set up the unit, the central bank said in a statement released in Washington.