Noted jurist and a former union minister Ram Jethmalani died on Sunday at the age of 95, his family members said. He breathed his last at 7.45 am at his official residence in New Delhi, his son Mahesh Jethmalani said. 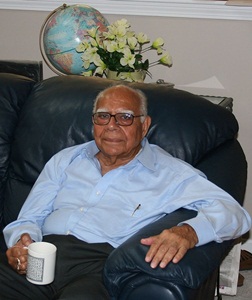 Jethmalani would have been 96 on 14 September, his son Mahesh said, adding that he was not keeping well for the past few months.
His last rites will be performed in the evening at the Lodhi Road crematorium here.
Prime Minister Narendra Modi condoled the death of Ram Jethmalani, saying the country has lost an exceptional lawyer and an iconic figure who made rich contributions in courts and Parliament.
He said, Jethmalani was “witty, courageous and never shied away from boldly expressing himself on any subject“.
“In the passing away of Shri Ram Jethmalani Ji, India has lost an exceptional lawyer and iconic public figure who made rich contributions both in the Court and Parliament,” the prime minister tweeted.
Vice President M Venkaiah Naidu on Sunday said the country has lost a great intellectual and a patriot.
“Deeply saddened to learn about the demise of Shri Ram Jethmalani ... one of the brilliant minds of Bharat. In his passing away the nation has lost a distinguished jurist, a great intellectual and a patriot, who was active till his last breath,” the Vice President’s secretariat tweeted.
Jethmalani’s career has been marked by high-profile cases. Known as a criminal lawyer, Jethmalani repeatedly proved his mettle in the court-room, making him one of the highest-paid lawyers in the country.
Jethmalani’s spectacular journey began in the 1950s when he became involved in the famous Nanavati murder case of 1962 — where a naval officer was tried for the murder of his wife’s alleged lover.  The case helped him establish himself in Bombay where he had moved from Karachi after partition (He was a partner in a law firm in Karachi).
Jethmalani was elected a member of Parliament in the 6th and 7th Lok Sabha on a Bhartiya Janta Party ticket from Mumbai and had served as the union minister for law in the Atal Bihari Vajpayee government from 1999 to 2000.
MORE REPORTS