Gitanjali Rao, an 11-year-old schoolgirl from America, has suddenly become a celebrity by inventing a cheap device that rapidly tests water for lead contamination she's been granted the accolade of ''America's Top Young Scientist''. 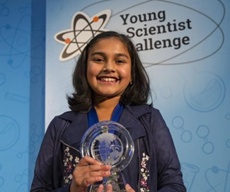 Gitanjali Rao has been honoured as "America's top young scientist" for inventing a quick, low-cost test to detect lead-contaminated water. She was selected from 10 finalists who had spent three months collaborating with scientists to develop their ideas.

The seventh-grader Indian American, hailing from Lone Tree, Colorado, also won a prize money of $25,000 for her device. Gitanjali hopes to become a geneticist or an epidemiologist in the future.

The device that Gitanjali invented is small and portable; it's designed to be used by people who want to know if the water they use is lead-free. It is named Tethys after the Greek Titaness of freshwater.

Tethys, which was built with the help of 3M scientists over the summer, uses specially tuned carbon nanotubes that react to the presence of lead. Pairing it with a cell phone app, people can quickly determine whether or not their water has been contaminated.

Gitanjali's invention was inspired by the scandal in Flint, Michigan, where officials are facing charges, including manslaughter, over water contamination in 2014-15.

Federal Emergency Management Agency (FEMA), an organisation that deals with the aftermath of catastrophic natural disasters, had to intervene to find a solution for the ongoing crisis.

Other inventions by children that made to the last round included a robot that helps reduce water wastage and a biodegradable material made from fruit that can clean up oil spills among others.

Every year, the Discovery Education 3M Young Scientist Challenge asks kids up and down the country to explain in a short video a new scientific idea or invention – one that solves an everyday problem.