Former Indian envoy to US Naresh Chandra dies in Goa

The then President A.P.J. Abdul Kalam conferring the Padma Vibhushan to Naresh Chandra, former India's Ambassador to US in New Delhi. File 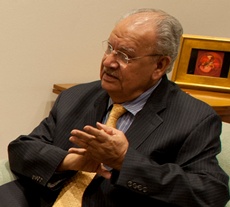 Naresh Chandra, a former Indian ambassador to the US, and Padma Vibhushan awardee, died at the Manipal hospital at Dona Paula near Panaji on Sunday night. Chandra (82) died due to multiple organ failure.

Naresh Chandra, who was a diabetic, was admitted to the hospital on Friday evening with complaints of fever and vomiting. He suffered a cardiac arrest on Sunday that led to his death, reports quoting hospital sources said.

The doctors were able to revive Chandra from the cardiac arrest but his organs had started failing, hospital sources said.

Chandra, who was holidaying in Goa took ill and was referred to the Manipal Hospital by his writer friend Dr Maria Couto from Aldona (North Goa) for treatment, according to reports.

Chandra used to be a frequent visitor to Goa and stayed with his nieces, one at Nerul and another one at Parra, in north coastal Goa, according to Dr Couto.

His body will be flown to Delhi by 2 pm flight today for the final rites.