Delhi University Professor G N Saibaba and four others have been sentenced to life imprisonment for being associated with a front organisation of a banned Maoist group and promoting anti-national activities. 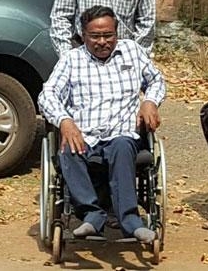 The court has also found JNU student Hem Mishra and four others guilty of waging war against the country and supporting the ideology of the banned organisation, CPI (Maoist). Judge Suryakant Shinde sentenced Saibaba, Mishra and three others to life while a sixth person Vijay Tirke was sentenced to 10 years rigorous imprisonment.

The wheelchair-bound professor, who is 90-per cent disabled, was first arrested in May 2014. He was given bail by the Supreme Court in June last year after he pleaded that his health was deteriorating fast in jail.

Saibaba's lawyers say they will appeal against this decision at the Nagpur Bench of the Bombay High Court.

Calling the judgment shocking, Vasanta, the wife of Professor Saibaba, said, "It seems the state and Central governments have put a lot of pressure on the judiciary to implement anti-people and undemocratic policies at the behest of corporates and MNCs."

The government, she said in a statement, has been putting "relentless pressure on my family for the last four years" by raiding their house in Delhi. "As a wife I will fight in the higher courts to seek justice," she added.

Professor Saibaba had approached the Supreme Court after the Nagpur bench of the Bombay High Court cancelled his bail, and he was sent back to the Nagpur Central jail in December 2015.

Saibaba was picked up from his house in Delhi in 2013 after Mishra and two others were caught with some incriminating letters and a memory card which contained, according to police, incriminating documents about the banned organisation.

The search at Saibaba's house yielded more of the same materials after which he was put in jail with others.

The 49-year-old professor suffers from a serious heart condition and needs help for every task including bathing, eating, washing and even going to the toilet. In the jail, he was allegedly dragged by his hands by guards, which ruptured his nerves from neck to left shoulder and made his left hand immobile. He also had a history of falling unconscious during the 14-month period he was in prison.

A teacher at the Ram Lal Anand College, Professor Saibaba had been asked not to enter its premises without permission as it creates "law and order problems".  He had also been attacked thrice on the college premises. His Rs62,000 salary was halved by his college after instructions from the University authorities, who pushed his family out of the campus after his arrest.

His friends and rights activists have argued that Saibaba needs to be treated with honour as he was a disabled professor and not a threat to society. An online campaign has been launched demanding justice for him.