Philippines' President Duterte likens himself to Hitler in war on drugs

Philippines President Rodrigo Duterte appeared to liken himself to Nazi leader Adolf Hitler on Friday when he said he would ''be happy'' to exterminate three million drug users and peddlers in the country. 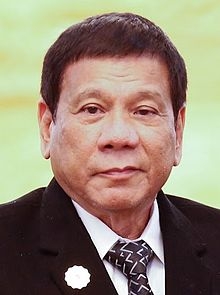 Although the administration of US President Barack Obama played down the remark, Duterte's comments triggered shock and anger among Jewish groups in the United States, which could create pressure on the US government to take a tougher line with the Philippines leader.

US defence secretary Ash Carter told a news conference following a meeting of Southeast Asian defence chiefs in Hawaii that he personally found Duterte's comments ''deeply troubling'', though the matter wasn't discussed at the meeting.

State department spokesman Mark Toner had earlier described Duterte's remarks, made in a rambling speech in Davao City, as ''a significant departure'' from America's partnership with the Philippines ''and we find them troubling''.

Duterte told reporters that he had been ''portrayed to be a cousin of Hitler'' by critics.

Noting that Hitler had murdered millions of Jews, Duterte said, ''There are three million drug addicts (in the Philippines). I'd be happy to slaughter them.

''If Germany had Hitler, the Philippines would have ...,'' he said, pausing and pointing to himself.

''You know my victims. I would like (them) to be all criminals to finish the problem of my country and save the next generation from perdition.''

UN special adviser on the prevention of genocide, Adama Dieng, expressed alarm and urged the Philippines leader to exercise restraint in his use of language, a UN statement said.

Dieng also called on Duterte to support an investigation into the reported rise in killings resulting from his anti-drug campaign, the statement said.

In August, Duterte threatened to withdraw the Philippines from the United Nations after it called for an end to the killings.

In Washington, a State Department spokeswoman, Anna Richey-Allen, had repeated concerns about reports of extrajudicial killings but offered no response to Duterte's comment referring to Hitler.

A White House official on Friday stuck to a strategy of stressing Washington's long-standing ties with Manila, saying, ''We continue to focus on our broad relationship with the Philippines and will work together in the many areas of mutual interest.''

How relations between the US and the Philippines evolve will depend more on what Duterte does than on what he says, administration officials have said.

US officials had said they would use the defence chiefs meeting in Hawaii to clarify comments by Duterte that throw into doubt his commitment to military ties with the United States, including joint exercises and patrols.

While expressing his own unease with Duterte's comments, Carter described Washington's partnership with Manila as ''an alliance of independent and strong nations''.

''And like all alliances it depends on the continuation of a sense of shared interests. So far in US-Philippine history we have had that. We would look forward to continuing that but that's something that we continue to discuss with the Philippine government,'' he said.

Since Duterte took office on 30 June more than 3,100 people have been killed, mostly alleged drug users and dealers, in police operations and vigilante killings.

Duterte, who was elected in May on the back of a vow to end drugs and corruption in the country of 100 million people, has insulted Obama and in a number of remarks he has undermined the relationship between Manila and Washington.

On Friday, reacting to critical comments on his war on drugs by US Senators Patrick Leahy and Benjamin Cardin, Duterte said, ''Do not pretend to be the moral conscience of the world. Do not be the policeman because you do not have the eligibility to do that in my country.''

Duterte has said there will be no annual war games between the Philippines and the United States until the end of his six-year term, and his hostility may make Washington's strategy of rebalancing its military focus toward Asia in the face of an increasingly assertive China more difficult to achieve.

Murray Hiebert, a Southeast Asia expert at the Center for Strategic and International Studies think tank in Washington, told Reuters Obama was ''taking the long view'' in dealing with Duterte. Obama leaves office in January.

Malcolm Cook, a senior fellow at Singapore's ISEAS Yusof Ishak Institute, said the US-Philippines alliance was not necessarily at risk, but Washington could seek to focus on ties elsewhere in the region.

''We are all in some sense becoming, by necessity, desensitized to Duterte's language,'' he said.