'The Greatest' is no more: boxing legend Muhammad Ali dead

Legendary boxer Muhammad Ali, three times the world heavyweight champion and an Olympic Gold medallist, has died at the age of 74 in a hospital in Phoenix, Arizona. 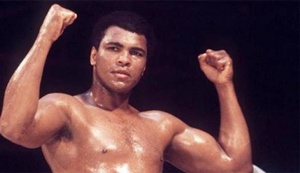 Ali was hospitalized on Thursday. US media reported his respiratory trouble was complicated by his Parkinson's disease.

Ali spokesman Bob Gunnell earlier told the Courier-Journal in Ali's hometown of Louisville that the fighter remained in fair condition and that a brief stay was still expected.

Gunnell noted the "media frenzy" touched off each time the iconic fighter is hospitalised, but multiple media reports that Ali's condition was deteriorating triggered widespread concern on Friday evening.

Ali, known globally not only for his storied ring career but also for his civil rights activism, had been hospitalised multiple times in recent years.

He spent time in hospital in 2014 after suffering a mild case of pneumonia and again in 2015 for a urinary tract infection.

His Parkinson's, thought to be linked to the thousands of punches he took during a career that spanned three decades, has limited his public speaking for years. But he continued to make appearances and offer opinions through his family members and spokespeople.

In April, he attended a Celebrity Fight Night Dinner in Phoenix that raised funds for treatment of Parkinson's.

In December, he issued a statement rebuking US presidential hopeful Donald Trump's call for a ban on Muslims entering the United States.

News of his latest health setback sparked concern among admirers.

British boxer Amir Khan also offered support via Twitter, saying "Our Prayers and thoughts are with Muhammad Ali and his family".

Khan added the hashtag "AliBomaye" a reference to the chant supporting Ali in the 1974 Rumble in the Jungle against George Foreman in Zaire.

Ali - whose legendary boxing career stretched from 1960 to 1981 - dazzled fans with slick moves in the ring, and with his wit and engaging persona outside it.

His opposition to the Vietnam War saw him banned from the sport for years, but the US Supreme Court overturned his conviction for draft dodging in 1971.

Once vilified in some quarters for his conversion to Islam and his outspoken stance on civil rights issues, Ali held firm to earn dozens of tributes, lighting the Olympic torch in 1996 in Atlanta and being named a UN Messenger of Peace in 1998.

He received the highest US civilian honour, the Presidential Medal of Freedom, in 2005.

Three-time champ
Ali dominated boxing in the 1960s and 1970s and held the heavyweight title three times. His fights were among the most memorable and spectacular in history, but he quickly became at least as well known for his colourful personality, his showy antics in the ring and his standing as the country's most visible member of the Nation of Islam.

When he claimed the heavyweight championship in 1964, with a surprising upset of the formidable Sonny Liston, Ali was known by his name at birth, Cassius Clay. The next day, he announced that he was a member of the Nation of Islam, a move considered shocking at the time, especially for an athlete. He soon changed his name to Muhammad Ali.

"I know where I'm going and I know the truth, and I don't have to be what you want me to be," he said at the time, signalling his intent to define his career on his own terms. "I'm free to be what I want."

Ali came to represent a new kind of athlete, someone who created his own style in defiance of traditions. Glib, handsome and unpredictable, he was perfectly suited to television, and he became a fixture on talk shows as well as sports programmes.

He often spoke in rhyme, using it to belittle his opponents and embellish his own abilities. "This is the legend of Cassius Clay, the most beautiful fighter in the world today," he said before his 1964 title bout. "The brash young boxer is something to see, and the heavyweight championship is his destiny."

One of his assistants, Drew "Bundini" Brown, captured his lithe, graceful presence in the ring, saying Ali would "float like a butterfly, sting like a bee." The description entered the popular lexicon.

Ali appealed to people of every race, religion and background, but during the turbulent, divisive 1960s, he was particularly seen as a champion of African Americans and young people. Malcolm X, who recruited Ali to the Nation of Islam, once anointed him "the black man's hero".

Stand for peace
In 1967, after Ali had been heavyweight champion for three years, he refused to be inducted into the Army during the Vietnam War. Despite the seeming contradiction of a boxer advocating non-violence, he gave up his title in deference to the religious principle of pacifism.

"Why should they ask me to put on a uniform and go 10,000 miles from home and drop bombs and bullets on brown people in Vietnam," Ali said in 1967, "while so-called Negro people in Louisville are treated like dogs and denied simple human rights?"

His title was immediately taken away, and he was banned from his sport for more than three years. He was sentenced to five years in prison, but a prolonged appeals process kept him from serving time.

Ali's decision outraged the old guard, including many sportswriters and middle Americans, who considered the boxer arrogant and unpatriotic. But as the cultures of youth and black America were surging to the fore in the late 1960s, Ali was gradually transformed, through his sheer magnetism and sense of moral purpose, into one of the most revered figures of his time.

A casual statement he made in 1966 - "I ain't got no quarrel with them Viet Cong" - distilled the antiwar views of a generation.

"Ali, along with Robert Kennedy and the Beatles in the persona of John Lennon, captured the '60s to perfection," writer Jack Newfield told Thomas Hauser, the author of a 1991 oral biography, Muhammad Ali: His Life and Times.

"In a rapidly changing world," Newfield added, "he underwent profound personal change and influenced rather than simply reflected his times."

Later, as Ali's boxing career receded into the past, and as neurological infirmities left him increasingly slowed and silenced, he became a symbol of unity and brotherhood, someone whose very presence and image acquired an aura of the spiritual. He was greeted by thousands whenever he toured the world.

Muhammad Ali was particularly seen as a champion of African Americans and young people.

He "evolved from a feared warrior," Hauser wrote, "to a benevolent monarch and ultimately to a benign venerated figure."

In 1996, Ali stood at the top of a podium during the opening ceremonies of the Summer Games in Atlanta in what became one of the most indelible moments in Olympic history. Shakily holding the torch as an estimated 3 billion people watched on television, Ali lit the Olympic flame, marking the official beginning of the Games. He stood alone before the world, a fragile, yet still indomitable demigod.

Moulded from Clay
Cassius Marcellus Clay Jr was born 17 January 1942, in Louisville. His father was a sign-painter, and his mother was a domestic houseworker.

Ali played few sports as a child, but he began boxing at age 12 to exact revenge on a thief who had stolen his bicycle. He quickly became enamoured of the sport, and he won several national amateur boxing championships before he graduated from high school in 1960.

That year, he went to the Summer Olympics in Rome and came back with the gold medal in the light-heavyweight division, defeating a three-time European champion from Poland. He was only 18.

Ali then became a professional fighter, signing a contract with 12 wealthy supporters who called themselves the Louisville sponsoring group, or syndicate. After working briefly with light-heavyweight champion Archie Moore, Ali joined forces with trainer Angelo Dundee, whom he had met several years earlier. Dundee took Ali to Miami Beach, Florida, to train at the fabled Fifth Street Gym on a then-run-down street corner.

At the time, greater Miami was as segregated as any city in the South, and Ali could not try on clothes at white-owned department stores. The police sometimes stopped to question him when he was doing his road work, running several miles over a causeway from Miami to Miami Beach while wearing high-topped boots.

In the ring, Ali had an unconventional, almost casual style, lightly bouncing on his feet while keeping his hands low at his sides. Some sportswriters considered it an almost suicidal approach, but Dundee trusted Ali's foot speed and quick reflexes, which enabled him to evade punches.

Because of his unusual stance and constant movement, Ali's punches arrived from unexpected angles, carrying devastating power. As other fighters hunkered in the centre of the ring, with their fists doubled in front of their faces, Ali danced around them, seemingly at play.

Still known by his original name of Cassius Clay, he began to develop a mass following soon after his first professional fight in 1960. He vanquished one opponent after another, often predicting the round in which he would claim victory. He wore flashy white boxing boots and attracted attention with his comical verse.

Showmanship
From the beginning, Ali had a flair for showmanship. At 19, he was the subject of a multi-page spread of photographs in Life magazine after he convinced the photographer, Flip Schulke, that he had long trained underwater to improve his endurance and strength. In fact, Ali had never been in a swimming pool before he posed for the eye-catching pictures.

As the 25 February 1964, title bout with Liston approached, Ali was a 7-to-1 underdog, and few gave him a chance against the champion, a menacing ex-convict with devastating power. But Ali, then 22, had filled out to a well-proportioned 6-foot-3 and 210 pounds. He was proudly aware of his physical beauty, especially in contrast to the glowering, silent Liston, whom he taunted as "a big, ugly bear".

Engaging in a campaign of psychological warfare, Ali drove to Liston's training camp at the wheel of a bus, with the slogan "World's Most Colorful Fighter" painted on the side, challenging the champion to come out and fight him in the street.

He recited rhymes that reduced Liston to a comic punch line:

"Who would have thought when they came to the fight

"That they'd witness the launching of a human satellite?

"Yes, the crowd did not dream, when they put up the money,

"That they would see a total eclipse of the Sonny."

As the bell rang to open the seventh round, the demoralized Liston sat on his stool, refusing to continue the fight.

From a boxing ring in Manila to villages in Zaire to the Olympic Games in Atlanta, he had a radiant presence that seemed more in keeping with that of an international religious leader than a retired athlete. More than almost any other figure of his age, Ali was recognised and honoured as a citizen of the world.

"Look at all those lights on all those houses," Ali told Esquire magazine writer Bob Greene in 1983, while flying into Washington's National Airport. "Do you know I could walk up to any one of these houses, and knock on the door, and they would know me?

"It's a funny feeling to look down on the world and know that every person knows me."