As Japan's Prime Minister Shinzo Abe launched his India visit on Saturday amid a flurry of discussions – including direct talks with Prime Minister Manmohan Singh - Tomohiko Taniguchi, a councillor in Japan's Cabinet Secretariat and a close aide accompanying Abe, told newspersons in New Delhi that Abe considers Singh as his ''mentor or guru''.

Under Singh – who will relinquish his stewardship of the country after the general elections in a few months - India's relationship with Japan has grown into a strategic partnership, he said. 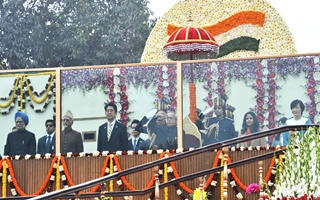 Japan is the only country after Russia with which India holds annual summit meetings. Incidentally, Abe is planning a summit with Russian President Vladimir Putin in February to coincide with the Winter Olympic Games at Sochi in that country.

The growing relationship between the two countries was underlined by the fact that Abe was the chief guest at India's Republic Day celebrations on Sunday, the second day of his three-day visit. Japan's Emperor Akihito visited India last year, while Singh had gone to Tokyo before that.

According to Taniguchi, the joint statement that India and Japan issued after the annual summit on Saturday is exhaustive and can withstand any changes in political equations after the coming Lok Sabha elections.

While the joint statement covered energy partnerships and other infrastructure investments, with Japan promising continued support for India's such projects, defence appeared to be the main focus of the statement, covering maritime security and India-US-Japan naval exercises amid a growing Chinese irredentism on the high seas.

The National Security Advisers to both governments will continue discussions on China's military rise as well as situation in Noth Korea, the South China and East China Seas, Afghanistan, Iran and Iraq.

India and Japan have signed agreements on cooperation in the energy and telecom sectors during Abe's visit. After talks on Saturday, Manmohan Singh said his government was taking steps to facilitate Japan's links with the India's growing economy.

Singh said that India also was discussing with Japan the possibility of buying an amphibian aircraft called the US-2 and its co-production in India.

''More broadly, we are working toward increasing our cooperation in the area of advanced technologies,'' Singh said in a joint statement after the talks.

The two agreed to hold regular consultations between their national security councils on security issues. India invited Japan's Maritime Self-Defence Force to participate in this year's India-US naval exercises off India's western coast, according to the statement.

The Indo-US exercises, launched in 2006, include air missions and sea control missions aimed at preventing piracy and countering terrorism at sea.

Abe arrived in New Delhi on Saturday for a three-day visit. Japan is keen to boost exports of atomic technology and other infrastructure to help revive its economy.

Singh said, ''Our negotiations toward an agreement for cooperation in the peaceful uses of nuclear energy have gained momentum in the last few months.'' Japan's sales of nuclear equipment and technology to India have been hampered by sensitivity in Japan over India's atomic tests and the country's refusal to sign the Nuclear Non-Proliferation Treaty.

India has announced a moratorium on further nuclear testing, but Japan – perhaps the world's strongest opponent of nuclear weapons, being the only nation to have suffered the consequences of such a weapon at the end of World War II - also wants a clearer commitment from New Delhi.

Under the agreements, Japan will provide a loan for increasing power generation in India and help India enhance energy efficiency in telecom towers in the country. Japan offered to help set up high-speed rail systems in India and the New Delhi-Mumbai Industrial Corridor project, the statement said.

Japan has agreed to lend $113 million for reconstruction work in the mountainous state of Uttarakhand, devastated by floods last year; $14.6 million to a children's hospital in southern India; and nearly $2 billion for the expansion of New Delhi's Metro train services. The countries signed another agreement for promoting tourism, the statement said.