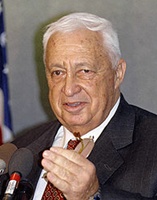 Sharon, had been in coma after suffering a stroke in January 2006. He died from multiple organ failure at Chaim Sheba Medical Center, near Tel Aviv.

Sharon will be buried today in a military ceremony at his ranch, in Israel's southern Negev desert according to an e-mailed statement from prime minister Benjamin Netanyahu's office.

The late prime minister's casket, draped with the country's blue-and-white flag, was mounted on Sunday on a black bier in the courtyard of the parliament in Jerusalem to allow Israelis to pay their respects.

Sharon was hailed as a brilliant military strategist, but ''the bulldozer'', as the media called him leaves behind a controversial legacy stemming from his actions both in war and 'peace'.

Sharon ''was first and foremost a warrior and a commander, among the Jewish people's greatest generals in the current era and throughout its history,'' Netanyahu said at the weekly cabinet meeting in Jerusalem, according to a statement from his office.

''He was tied to the land; he knew that it had to be defended. He understood that above everything, our revival is our ability to defend ourselves by ourselves.''

Though Sharon was loved and admired by his countrymen, his highly controversial decision to evacuate settlers and soldiers from the Gaza Strip earned him their wrath in equal measure.

The about turn to unilaterally hand over the Gaza Strip to Palestinians, forcing 9,000 Israelis to evacuate their homes, turned Israeli politics on it head and left his loyal supporters aghast and betrayed.

Sharon would be remembered for taking decisive action and never holding himself back when he felt he could make the decisive difference, come what may.  He helped establish Jewish communities from the Golan Heights, to the West Bank, greater Jerusalem and Gaza, which helped build the constituency that catapulted him to the prime ministerial office.

Perhaps, what former MP Yaakov (Ketzela) Katz, a founder and leader of the Settlement Movement said this in an interview with 'The Jewish Press', best sums up the troubled and complex legacy of ''the bulldozer'' of ''the bulldozer for good'' as the right called him, '' I hate what Sharon did but he saved my life and I love him.''