Manmohan Singh unwilling to be PM after elections; says Modi will be a disaster 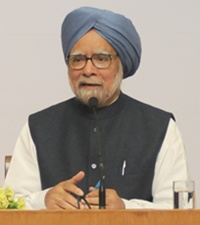 Prime minister Manmohan Singh today ruled out a third term as leader of the UPA and perhaps prime minister, but said, "We are set for better times".

He said the growth momentum is picking up and with a revival of the global growth cycle, the Indian economy will also benefit.

Announcing his retirement at the end of the current term, at a media meet in the capital, he also said he would be happy to hand over the baton to Congress vice president Rahul Gandhi once the UPA wins the next elections.

''We will announce the Congress PM candidate at an appropriate time,'' he said, adding, ''Rahul Gandhi has outstanding credentials to be nominated as Congress's PM candidate.''

The prime minister admitted that the corruption charges against the government and its various ministries had affected its image. "We did not do well in the assembly elections. We will learn our lessons," he said.

However, he felt the corruption charges related only to the UPA-I government and that the UPA-II is relatively clean.

Manmohan Singh also tried to project a clean image of himself, saying that he had done his best as a representative of a coalition government.

''I am the same person as I was nine years ago. I have never used my office to enrich my relatives or friends,'' he said.

''I insisted that spectrum and coal block allocation be done through auction. When history of this period will be written, we will come out unscathed.''

He said the people of the country did not heed to the charges of corruption when they gave the UPA a second term. He also blamed the media for reading too much into the allegations of graft.

''History will be kinder to me than the contemporary media,'' he said.

And, as if to duck charges levelled against his scam-hit government and defend Rahul Gandhi's selection as the Congress party's prime ministerial candidate, Manmohan Singh said Narendra Modi will be disastrous as prime minister.

''It will be disastrous for the country to have Narendra Modi as the Prime Minister.

''I do not believe the kind of strength associated with Modi is good for the country,'' he said.

Highlighting the achievements of his government, Manmohan Singh said the number of people below poverty line has come down, growth rate in past 9 years has been the highest.

The major worry is about inflation, he said, adding that people's fears are legitimate on this score.

He said there is also concern over lack of enough employment opportunities in the manufacturing sector and more efforts are needed to support medium and small enterprises.

India will continue to invest in its defence and security, while continuing to seek better relations with our neighbours, the prime minister said.

''It will be our endeavour to better long-term and beneficial relations with global players,'' he said.