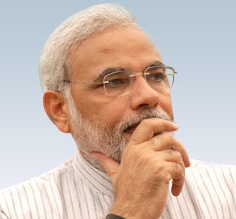 Controversial politician and chief minister of Gujarat, Narendra Modi, has been named by India's main opposition party, as its prime ministerial candidate for elections to be held next year.

The 63-year old Modi, who was chosen to lead the party's campaign in the coming elections, has been chief minister of Gujarat state since 2001.

Modi's candidacy to India's highest executive office, has been considerably boosted by his success in making Gujarat one of India's most prosperous states, after communal riots in the state in 2002 left more than a thousand people dead and many more homeless.

His detractors accuse him of not having intervened effectively to stop the riots.

In recent months international investors have been flocking to Gujarat, impressed with Modi's image of a clean, corruption free and efficient administrator.

Many commentators remain sceptical of a presidential-style referendum on Modi.

The BJP headquarters in New Delhi saw a crowd of jubilant supporters cheer the announcement of Modi's candidacy yesterday.

"I assure that I will leave no stone unturned in working for a BJP victory in the 2014 elections," Modi said in a statement after being nominated.

"I seek the blessings of the people in our efforts to free our nation of the turbulent times we are going through."

According to the Congress party, with its strong voter base in rural India, Modi's policies would further widen India's rich poor gap and benefit large corporations, the Wall Street Journal reports. Several development indicators, in the state including a skewed sex ratio, high malnutrition and tardy pace of decline in infant mortality, the party points out, do not quite add up to the image of a vibrant state on the move, the report said.

According to Sanjay Jha, a Congress party spokesman, in a country like India where inequities were profound, one could not have a small government and free markets approach. He added, growth had to be inclusive and that was where Modi had failed to deliver.

Modi's message, however has gone down well with the Indian middle class frustrated with the country's faltering economy. Younger Indians with their aspirations driven by the consumerist culture peddled by advertising messages on smartphones and television, are especially impatient.

According to Ashok Malik, a Delhi-based political commentator, those who were earlier put off by the perception of his social record were now swinging in his favour. He added, the Congress's dismal economic performance made him a more compelling candidate.