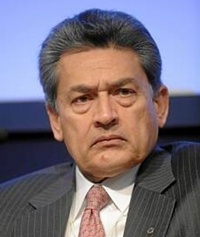 Rajat Gupta, a former director of Goldman Sachs Group Inc, has been ordered by a US court to pay $13.9 million in civil penalties, and banned from serving as an officer or director of a public company, for having illegally passed corporate secrets to former hedge fund manager Raj Rajaratnam.

The US Securities and Exchange Commission said on Wednesday the order was issued earlier in the day by US District Judge Jed Rakoff in Manhattan, who also oversaw Gupta's related criminal trial.

Gupta, 64, is appealing his June 2012 conviction and two-year prison term for having passed on tips picked up from Goldman board meetings to Rajaratnam, the convicted former billionaire who owned the Galleon Group, in the second half of 2008.

The tips included news about Goldman's financial results and a crucial $5-billion investment in the group during the financial crisis by Warren Buffett's Berkshire Hathaway Inc.

Gupta is also a former global managing director of the consulting firm McKinsey & Co. He remains free during his appeal.

"The sanctions imposed today send a clear message to board members who are entrusted with protecting the confidences of the companies they serve," George Canellos, co-director of the SEC's enforcement division, said in a statement.

Gary Naftalis, a lawyer for Gupta, declined to comment.

Gupta in May argued before the same court that wiretap evidence should have been excluded from his trial as well.

In one such call, just before Berkshire's investment was announced, Rajaratnam was heard telling a trader that a caller had told him that "something good might happen to Goldman."

The SEC in 2011 won a $92.8 million civil penalty against Rajaratnam, then a record for an SEC insider trading case.