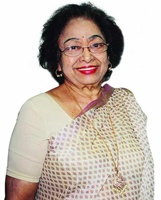 Mathematical wizard and astrologer Shakuntala Devi, popularly known as the 'human computer', died at a hospital in Bangalore on Sunday morning, following a cardiac arrest. She was 80.

She was admitted to the hospital two weeks ago due to heart and lung problems. She died at about 8.15 am on Sunday.

Shakuntala Devi is survived by a daughter and son-in-law.

Born into a humble family in Gavipuram Guttahalli, Shakuntala Devi showed early signs of her genius while giving public demonstrations of card games on road shows with  her father, a former circus performer, when she was just three years old. She used to outsmart her father not only in the game, but in remembering the cards as well.

She demonstrated her mathematical skills at the University of Mysore when she was hardly 6 years.

And, two years later, she again proved herself as a child prodigy at Annamalai University.

Unlike several child prodigies, Shakuntala Devi continued to develop her mental faculties and improve her mathematical abilities as she grew up.

In 1977, she was asked to compete against a computer took to see if she could it by extracting the 23rd root of a 201-digit number mentally faster - she took just 50 seconds whereas the computer took 62 seconds to do the calculation at that time.

She could even tell the day of the week of any given date in the last century in no time.

Shakuntala Devi earned the nick name `human computer' for her ability to make complex mental calculations at an astonishongly rapid pace, where which she mentioned in the Guinness Book of World Records for her extraordinary skills.

She has also various books to her credit, like Fun with Numbers, Awaken the Genius in Your Child, Book of Numbers, In the Wonderland of Numbers, Perfect Murder, Puzzles to Puzzle You, Astrology for You and 'Mathablit'.

During her later years, the maths vizardhad a vision of making mathematics easy for children and setting up a mathematics university in her name. She also wanted to encourage research in vedic mathematics.

She founded and nurtured the Shakuntala Devi Education Foundation Public Trust to provide quality education for children from deprived sections of society.

The Trust runs a college in Bangalore, which also has a Mathematics Research Block.