After a bloody fight that left 20 Indian soldiers dead and a border standoff that lasted several months, Chinese and Indian troops have finally started simultaneously pulling back from the Pangong Tso Lake in Ladakh, as part of an agreement reached during the last round of military talks. 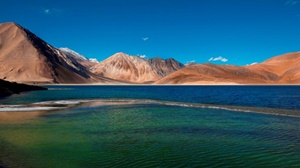 The Chinese defence ministry said on Wednesday that troops on both sides have begun simultaneous pullback, which was also confirmed by India’s defence minister Rajnath Singh in Parliament on Thursday.
“The Chinese and Indian frontline troops at the southern and northern bank of the Pangong Tso Lake started synchronised and organised disengagement from 10 February," China’s defence ministry spokesman senior colonel Wu Qian said.
“This move is in accordance with the consensus reached by both sides at the 9th round of China-India corps commander level meeting," Wu said in a written statement put up on the ministry website.
In New Delhi, defence minister Rajnath Singh said on Thursday that there was progress on the disengagement issue after nine months. He gave full credit to Indian troops for making China agree to disengage their forces.
Tensions have been running high between India and China for nine months since India first detected Chinese intrusions into its territory in May. India quickly mobilized troops to match the Chinese deployment that Singh said had started in April last year.
Last month, foreign minister S. Jaishankar warned ties were “truly at a crossroads" and that “choices that are made will have profound repercussions, not just for the two nations but for the entire world".
Over the weekend, Jaishankar acknowledged some progress in dialogue but added that this had not eased the situation.
However, reports citing sources said India was moving out some armoured components, while also “thinning out of troops" from the rear on the Indian side.
“We continue to hold strategic heights. Frontline troops are not disengaging at the moment. It is still early days," the report cited one source as saying.
He declined to confirm if the development could be described as “disengagement. “It’s a multi-step process, and there will be verification at each stage," the person said.
According to strategic analysts, India’s cautious response is understandable, given the tense situation on the ground.
“We will not judge the Chinese by their words, we will judge them by their actions," said former Indian ambassador to China Gautam Bambawale.
Even if there is disengagement of troops, “the trust deficit between both sides will not be bridged, considering that the Chinese have gone back on almost all the agreements they have signed in decades to stabilise the border," said the second person cited above.
MORE REPORTS