A wave of Mumbai-like terrorist attacks at 6 different locations in the Austrian capital of Vienna left at least seven people dead and several others injured, some of them seriously, in the evening on Monday. 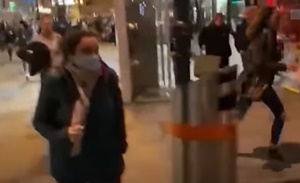 The location of the initial shooting was close to a major synagogue where police said there was "one deceased person" and several injured, including one police officer, adding that several shots were fired shortly after 8 pm local time on 2 November, in a lively street in the city center of Vienna.
Vienna Mayor Michael Ludwig told local media that 15 people had been taken to hospital, of whom seven were seriously injured.
The president of Vienna's Jewish community Oskar Deutsch said the shots had been fired "in the immediate vicinity" of the Stadttempel synagogue, but said the synagogue and office buildings was closed at the time of the attack.
"It sounded like firecrackers, then we realised it was shots," said one eyewitness quoted by public broadcaster ORF.
A shooter had "shot wildly with an automatic weapon" before the police arrived and opened fire, the witness added
While the attackers shot one person dead, an attacker was killed in police firing, in what Austrian Chancellor Sebastian Kurz described as a "repulsive terror attack"
One suspect was "shot and killed by police officers," Vienna police said on their Twitter account.
Interior Minister Karl Nehammer told public broadcaster ORF that the operation against the attackers was still underway at around 11 pm local time (2200 GMT).
Vienna Mayor Michael Ludwig told local media that 15 people had been taken to hospital, of whom seven were seriously injured.
The shooting began just hours before Austria was to re-impose a coronavirus lockdown to try to slow the spread of Covid-19.
Police said the attack was carried out by "several suspects armed with rifles", adding that there had been "six different shooting locations".
First gunshots were fired at around 8:00 pm at the Seitenstettengasse in the city's centrally-located first district.
"We are experiencing difficult hours in our republic," Kurz said on Twitter.
"Our police will act decisively against the perpetrators of this repulsive terror attack," he said, adding, "we will never be intimidated by terrorism and we will fight this attack with all means".
Kurz said police will handle anti-terror operation while the army will be given charge of important buildings in Vienna.
Nehammer urged Vienna residents to remain in their homes and keep away from all public places or public transport, also in view of the Covid-19 related restrictions.
This is the first time that terrorists targeted Austria with the type of major attacks that have hit other European countries.
"We French share the shock and sorrow of the Austrian people," French President Emmanuel Macron tweeted.
"After France, it's a friendly nation that has been attacked," he adde
EU Council chief Charles Michel tweeted that the bloc "strongly condemns this cowardly act".
And Germany's foreign ministry tweeted that the reports from Austria were "horrifying and disturbing".
"We can't give in to hatred that is aimed at dividing our societies," the ministry added
Czech police said they had started random checks on the border with Austria.
"Police are carrying out random checks of vehicles and passengers on border crossings with Austria as a preventive measure in relation to the terror attack in Vienna," Czech police tweeted.
Italian Prime Minister Giuseppe Conte also "strongly condemned" the shootings.
"There is no room for hatred and violence in our common European home," he said on Twitter in Italian and German.
MORE REPORTS