India to get its first Chief of Defence Staff

In a landmark military reform, the union government has approved the creation of the post of Chief of Defence Staff (CDS), who will head the Department of Military Affairs and also serve as the principal military advisor to the defence minister on tri-services matters. 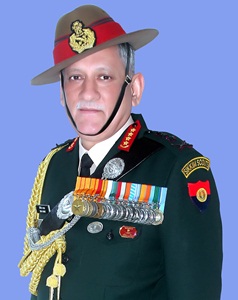 The Cabinet Committee on Security (CCS) at its meeting today approved the creation of a post of Chief of Defence Staff (CDS), who will be the single-point military adviser to the government as suggested by the Kargil Review Committee in 1999.
Announcing this at a press briefing, union minister Prakash Javadekar said the officer to be appointed as the Chief of Defence Staff will be a four-star General.
Reports citing official sources said Army Chief General Bipin Rawat could in all possibility the first Chief of Defence Staff.
Chief of Army Staff General Bipin Rawat, who superannuates on 31 December 2019, after a full three-year term, seems to fulfil the criteria for the coveted post.
"He will be drawing a salary equivalent to (each of the three) service chiefs and will head the Department of Military Affairs to be created under the ministry of defence. He will function as its secretary," Javadekar said during a cabinet briefing.
The CCS also approved the report of a high-level committee, headed by National Security Advisor Ajit Doval, which finalised responsibilities and the enabling framework for the CDS.
Prime Minister Narendra Modi had, on 15 August, announced that India will have a CDS as head of the tri-services. Since then the government appointed an implementation committee headed by NSA Ajit Doval to finalise an enabling framework and determine the exact responsibilities for the CDS.
Official sources said, “the Department of Military Affairs under the Chief of Defence Staff will facilitate the restructuring of military commands for optimal utilisation of resources by bringing about jointness in operations, including through the establishment of joint/theatre commands.”
The Chief of Defence Staff will also serve as the permanent Chairman of the Chiefs of Staff Committee. In this role, the CDS will be supported by the Integrated Defence Staff, news agency ANI quoted sources as saying.
Army Chief General Bipin Rawat, an advocate of new military technology, on Monday said non-contact warfare will help in gaining advantage over the adversary in future and that the Army must lead in embracing technology. Addressing a defence seminar in the capital, he said necessity was no longer the need for invention and innovations were driving technological advancement. Indian Army has to remain at the forefront of technological embrace, he said.
"Non-contact warfare is gaining relevance in future wars. That is not to say that the man on the ground...with a rifle in his hand will no longer remain relevant. They will remain relevant all through the ages," he said.
MORE REPORTS