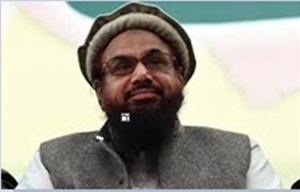 Saeed-led JuD is believed to be the front organisation for the Lashkar-e-Taiba, which is responsible for the attacks that killed 166 people in Mumbai in 2008.
Under pressure from the international community, the Pakistani authorities also launched investigation into the activities of the JuD and LeT and their alleged misuse of trusts to raise funds for terror-financing.
Saeed, who has several cases pending against him, was travelling to Gujranwala from Lahore to appear before an anti-terrorism court when the arrest took place, officials said, adding that he had been moved to an unknown location.
Reports said Saeed has been sent to the high-security Kot Lakhpat Jail in Lahore.
"The main charge is that he is gathering funds for banned outfits, which is illegal," said the Punjab province spokesman.
The move comes days before Pakistan Prime Minister Imran Khan's visit to Washington, where he will hold talks with President Donald Trump.
Government sources in India are skeptical and cautious until Hafiz Saeed is "actually tried and convicted".
The JuD is believed to be the front organisation for the Lashkar-e-Taiba (LeT), which is responsible for the attacks that killed 166 people.
The US Department of the Treasury has designated Saeed as a Specially Designated Global Terrorist, and the US, since 2012, has offered a $10 million reward for information that brings him to justice.
Pakistani authorities had earlier also detained Saeed following demands to act against terror, although he was later released following a court order.
Hafiz Saeed has for years been allowed to roam freely in Pakistan despite India's dossier of terror cases against him and evidence of his involvement in the four-day siege of Mumbai by 10 Pakistani terrorists.
Pakistan, which is included on the "grey list" of the Financial Action Task Force, a money laundering and terror finance watchdog, has been under increasing pressure to stop financing terror groups.
MORE REPORTS