India acted against terror, not against Pakistan: Sushma Swaraj

External affairs minister Sushma Swaraj today said the air strikes on terror camps inside Pakistan-occupied Kashmir was only intended to deter the perpetrators of terror and do not amount to any military action against the Pakistani state. 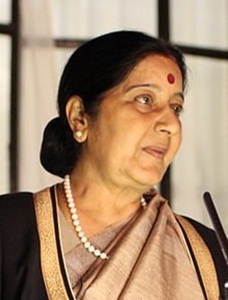 India’s action was not a military operation and the aim was to dismantle the terror infrastructure, she said, adding that India does not wish to see further escalation of the situation and will continue to act with responsibility and restraint.
Speaking to Chinese and Russian diplomats in New Delhi today, the external affairs minister said India specifically targeted terrorist training camp in Pakistan, adding that India’s action has the backing of all nations that show “zero tolerance to terrorism”.
Launching a scathing attack on Pakistan for the 14 February Pulwama terror attack at the Russia-India-China (RIC) meeting here, she defended India’s airstrikes on terrorist bases in Pakistan, saying that it was pre-emptive action aimed at stopping further attacks by Jaish-e-Muhammed (JeM).
Forty Central Reserve Police Force (CRPF) personnel were killed in a suicide attack by Pakistan-based Jaish-e-Mohammed (JeM) in Jammu and Kashmir’s Pulwama district on 14 February, sparking outrage in the country.
It was this that prompted India to bomb and destroy JeM’s biggest training camp in Balakot in Pakistan’s restive Khyber Pakhtunkhwa province, about 80-km from the Line of Control (LoC), early on Tuesday, killing a “very large number” of terrorists, trainers and senior commanders.
“The recent dastardly terrorist attack on our security forces in Pulwama in Jammu and Kashmir is perpetrated by Jaish-e-Muhammad, a Pakistan-based and supported terrorist organisation proscribed by the UN and other countries . We lost more than 40 personnel from CRPF,” Swaraj said.
“Such dastardly terrorist attacks are grim reminder for all the countries to show zero tolerance to terrorism and take decisive action against them,” she said at the meeting attended by Chinese foreign minister Wang Yi and his Russian counterpart Sergei Lavarov.
Pakistan, she said, instead of taking serious action against the terrorists and their supporters and taking the call of the international community to act against JeM and other terror groups, decided to deny any knowledge of the attack and out rightly dismissed claims by the JeM.
“In the light of continued refusal of Pakistan to acknowledge and act against terror groups on its territory and based on credible information that the JeM is planning other attacks in various parts of India, Government of India has decided to take pre-emptive action,” she said.
“The target was selected in order to avoid civilian casualties,” she said.
She said India’s action was not a military operation and the aim was to dismantle the terror infrastructure.
“No military installations were targeted. The limited objective of the pre-emptive strike was to act decisively against the terrorist infrastructure of the JeM in order to pre-empt another terrorist attack in India,” she said.
“India does not wish see further escalation of the situation and India will continued to act with responsibility and restraint,” she said.
MORE REPORTS