Defence against drones: the danger on the radar screen

Drones are practical and can be put to use for almost any purpose. They help rescue teams, survey sites and assist farmers in inspecting their fields. They are also the preferred method of extreme athletes for taking selfies from the sky, and they give the term “air mail” an entirely new meaning, as they begin to deliver letters and packages. 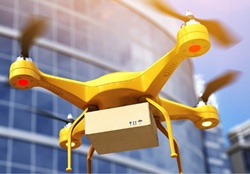 However, they can also be put to criminal and terrorist use, such as spying on people and objects, smuggling drugs and weapons into prisons, as well as to launch terrorist attacks on people, vehicles or buildings. Here, we are referring to unmanned aerial vehicles (UAVs and / or UAS for unmanned aerial system), also referred to as drones in every day usage.
Drones are becoming more and more powerful. In recent years the possible altitude, range, endurance, air speed and precision of navigation has risen appreciably. In addition, they can transport increasingly more mass. Moreover, drones are cheap, easy to obtain and also available as a kit. No wonder that their popularity is growing, both in the commercial and private sectors. In Germany alone, air traffic control authorities are working on the assumption that there will be more than one million drones in the country by 2020.
At the same time the number of security incidents has lso been on the rise; drones enter no-fly zones, such as airports or major outdor events such as rock festivals or football matches. Up to now such incidents have primarily involved mere negligence or indiscretion, such as drones of hobby pilots coming dangerously close to aircraft or illegally recording videos and taking photos of people or buildings. Yet, drones can also be used for specific terrorist purposes. Consequently, German security authorities have voiced their alarm as no effective defence system has been devised against this till date.
The danger that can be posed by drones was illustrated by an event that took place in 2014, when a drone displaying the flag of  Greater Albania was suddenly seen floating above the football field in Belgrade during the European Football Championship qualifier between Albania and Serbia.
This led to riots, resulting in the entire game having to be called off. Instead of a harmless flag, however, terrorists could have instead flown bombs into the stadium, and subsequently dropped them on  the crowd.
Defence against drones comprises a three-step approach.
The first step involves discovering the drone. Taking into account the high flight speeds of the flying objects and the limited recognition radius of sensor technology, presents a challenge.
The second step involves recognising just what type of drone it is and whether it represents any type of danger. Perhaps the thing hovering and buzzing so ominously above the starting field of the city marathon is just a harmless camera drone launched by the local TV channel.
If the flying object is identified as a dangerous drone, then the third step kicks in — that of countermeasures. These must be carefully planned. What is the model? What is the speed of the drone? What is its maximum permitted load? At what radio frequency is it being controlled? All this analysis and information needs to be made available as rapidily as real time. This is because, in case of an emergency, only a few seconds would be left to make the right decision and employ appropriate defensive countermeasures.
A distinction has to be made between passive and active measures. Active measures could involve either soft or hard measures. Passive measures are limited to, for example, triggering an alarm. Active measures, however, present a challenge to both the personnel and the technology involved, because every intervention is precarious and the legal consequences of it must be precisely weighed.
So-called “jamming” is an example of a soft measure, where signals are sent out to interrupt the radio connection of the drone and whoever is controlling it, thereby forcing it to land. Yet this only works if the drone has been programmed to land under such circumstances as otherwise it will continue to fly uncontrollably and then crash. In contrast, in the case of “spoofing” the drone is sent a factitious and incorrect GPS signal, in order to make it change course.
Hard defence includes physically intercepting or shooting down the drone, and is used only as the last ressort, because of the liklihood of danger to people. Hard defence also offers a wide choice such as shooting the drone down with a laser, water cannon or a gun, using kamikaze drones o bring it down, employing a safety net or an adhesive that renders the drone incapable of flying, or interference using a powerful acoustic sound or through a tether.
Since there are a variety of conceivable threatening situations, Fraunhofer researchers and their partners rely on a variety of approaches and technologies. For detection and identification, sensor technologies such as radio, acoustics, radar, and / or infrared and electro-optics are used.
Under ideal condityions, the sensors would serve to complement one another, but till now no sensor exists that can detect everything. Each sensor has its strong and weak points. Visual-optic sensors do not function at night or if there is rain and fog. In such a case, infrared or radar would be a better choice. If it is a question of the range of detection, then radar is superior to visual optic sensors and infrared sensors.
MORE REPORTS