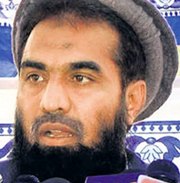 An Islamabad High Court dealing with the 26/11 Mumbai attack by Pakistani terrorists has refused to part with voice samples of mastermind of the operation, Zakiur Rehman Lakhvi, and six other suspects in the case as sought by the government.

The Pakistan government had filed an application in the court seeking voice samples of the suspects for comparing them with the communication intercepted by Indian intelligence, for further corroboration of the evidence presented before the anti-terrorism court (ATC,) as evidence against the seven suspects in the Mumbai attack case.

The trial court had, on 2011 and 2015, dismissed the issue of obtaining voice samples of Lakhvi on the grounds that "no such law exists that allows obtaining of voice sample of an accused".

The prosecution in its petition had pointed out that the Indian intelligence agencies had intercepted communication between the suspects and the terrorists in connection with the Mumbai attack in 2008.

In the recorded intercepts, the suspects are alleged to be instructing the terrorists.

The prosecution lawyers had argued that the samples were essential for concluding the investigation of this high profile case.

The trial court had also rejected another petition of the prosecution requesting the court to declare Ajmal Kasab and Faheem Ansari absconders in order to meet legal formalities.

The prosecution had told the court that unless it declared the two absconders, the trial against them would remain "inconclusive" as both have been cited as accused in the Mumbai attack case by Indian authorities and that they were also wanted by the Federal Investigation Agency (FIA) that was probing the 26/11 case.

Pakistani authorities arrested seven Lashkar-e-Taiba (LeT) members involved in the planning of the attacks including the terrorist group's operations commander Zakiur Rehman Lakhvi, the mastermind of the Mumbai attack.

Lakhvi, 56, secured bail in December, 2014, and was subsequently released from Adiala Jail on April 10, 2015, after the Lahore High Court set aside the government's order to detain him under a public security act.

A trial is underway against them at the ATC since 2009.