Megatons to Megawatts: Russia to supply uranium to US companies

Moscow: Russian state uranium trader Techsnabexport has said it would sign contracts worth atleast a billion dollars for the supply of low-enriched uranium to a number of major US energy companies before the end of the year. This uranium would be processed from highly-enriched uranium retrieved from nuclear warheads. 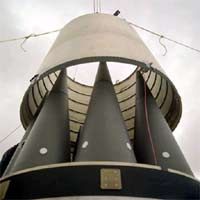 According to Techsnabexport three US companies affiliated with the FuelCo Group have signed three long-term low-enriched uranium supply contracts worth a total of $1 billion. "Another four such contracts will be signed before the end of the year," Techsnabexport CEO Alexei Grigoryev said.

The contracts are being signed under the HEU-LEU contract, also known as the Megatons to Megawatts agreement. Under the provisions of this agreement, signed in February 1993, some 500 metric tons of highly-enriched uranium (HEU), the equivalent of approximately 20,000 nuclear warheads from dismantled Russian nuclear weapons, would be converted into low-enriched uranium (LEU). This would then be converted into nuclear fuel for use in US nuclear reactors.

The agreement expires in 2013.

Under the contracts signed this week, enriched uranium will be supplied to the US companies from 2014 through 2020.

According to Grigoryev, Russia was also ready to discuss the establishment of a low-enriched uranium storage facility in the US to ensure long-term supplies to consumers.

Russia and the United States signed an agreement on civilian nuclear cooperation early this month. They are already cooperating on the HEU-LEU project.

Techsnabexpor exports goods and services produced by the Russian nuclear power sector and is integrated into state nuclear group Atomenergoprom.