Sophia the robot is now a citizen of Saudi Arabia 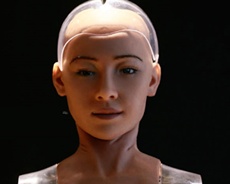 Sophia, developed by Hanson Robotics, was granted Saudi citizenship ahead of the Future Investment Initiative, held in the capital Riyadh on Wednesday.

Hansen Robotics was founded by American roboticist David Franklin Hanson, Jr, who is responsible for the creation of a series of realistic humanoid robots.

"I am very honored and proud of this unique distinction," Sophia told the audience, speaking on a panel. "This is historical to be the first robot in the world to be recognized with a citizenship."

She didn't elaborate on the details of her citizenship. She addressed the crowd without the customary headscarf and abaya, which Saudi women are required to wear.

Sophia, who looks a bit like Audrey Hepburn, gives facial expressions while talking and has an answer for every question.

Sophia, who is programmed to be witty, addressed the audience from behind the podium and was also interviewed by business writer Andrew Ross Sorkin at a Future Investment Conference in Riyadh on Tuesday.

Sophia responded to questions from moderator and journalist Andrew Ross Sorkin and answered questions pertaining to Sophia's status as a humanoid and concerns people may have for the future of humanity in a robot-run world.

Saudi Arabia is making an effort to promote itself as a destination to develop artificial intelligence and Sophia's ''citizenship'' was a move to bolster the effort.

Audiences at the panel listened riveted as Sorkin grilled Sophia over artificial intelligence, her own programming and concerns over how robots could take over the world.

Sophia, who took to the podium to answer all questions, claimed that her only purpose was to ''help humans live a better life. But Sorkin asked her to back up and address concerns over the rise of AI.

''Those sound like great goals..but go back to Blade Runner for a second,'' said Sorkin.

Sophia, a staunch opponent of Elon Musk, took a jibe at the founder of Tesla and SpaceX.

''You've been reading too much Elon Musk. And watching too many Hollywood movies. Don't worry, if you're nice to me, I'll be nice to you. Treat me as a smart input output system,'' she said.

And don't think that Elon Musk didn't notice.  The tech innovator tweeted a reply, ''Just feed it The Godfather movies as input. What's the worst that could happen?''