In a major political setback to V K Sasikala and the AIADMK faction owing allegiance to her, the Supreme Court today dismissed the review petition filed by her against the order convicting her in the disproportionate assets case, observing "there is no merit in the plea to review our own judgment". 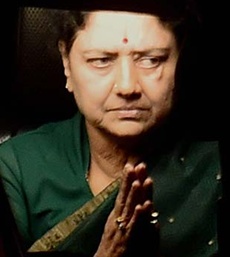 "We do not find any error in the common judgment impugned, much less an apparent error on the face of the record, so as to call for its review. The review petitions are, accordingly, dismissed," a bench of Justices S A Bobde and Amitava Roy.

The apex court took on record written submissions and propositions made by senior advocate Mukul Rohatgi, representing Sasikala and other convicts, but dismissed them.

Sasikala had moved the Supreme Court in May, seeking a re-examination of the court verdict that held her guilty in the case and sentencing her to four-year imprisonment.

She has been lodged in Parappana Agrahara Central Prison in Bengaluru since February. The Supreme Court had on 14 February convicted her in a disproportionate assets case along with her two relatives VN Sudhakaran and Ilavarasi.

The court's dismissal of the petition comes at a crucial time for Sasikala and her supporters in the AIADMK as they struggle to seize power from rival groups.

In fact, Sasikala's nephew who is acting deputy chief of the party, moved 19 of Sasikala supporters to a resort for safe custody to avoid cross voting by them in case of a trust vote in the assembly to decide the strength of the ruling factions.

The court verdict will also keep Sasikala out of the electoral politics for 10 years - four years in jail and six years of disqualification under the Representation of Peoples Act after her release.

The trial court had convicted J Jayalalithaa, Sasikala, Ilavarasi and Sudhakaran for amassing disproportionate assets to the tune of Rs66.65 crore during Jayalalithaa's first term as chief minister from 1991 to 1996.

Sasikala relied on an earlier apex court verdict of 1991 in which after the death of a prime accused, the proceeding against the co-accused was also abated in a corruption case.