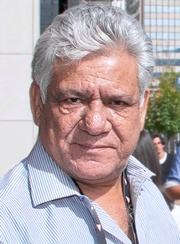 Reports citing his friends confirmed the veteran actor returned home on Thursday night after a film shoot. The door bell to his house at Lokhandwala's Oakland Park residence went unanswered on Friday morning, following which his driver raised an alarm.

Om Puri is the recipient of the Padma Shri award and two National awards and two Filmfare Awards, including a Lifetime Achievement Award over an illustrious film career spanning over four decades.

"I have no regrets at all. I have done quite well for myself. I didn't have a conventional face, but I have done well, and I am proud of it," the actor had posted in a tweet, looking back at his career in December 2016.

Om Puri studied at the Film and Television Institute of India and at the National School of Drama, where Naseeruddin Shah also studied much later.

Born on 18 October 1950 at Ambala in Haryana, Om Puri made his film debut in 1976 with the Marathi film 'Ghashiram Kotwal'.

A critically acclaimed actor, Puri featured in films like 'Ardh Satya', 'Jaane Bhi Do Yaaro', 'Aakrosh', 'Mirch Masala' and many others. More recently, he was seen in the movies, 'Dabangg', 'Bajrangi Bhaijaan' and 'Ghayal Once Again'.

He also had a memorable role opposite Helen Mirren in Steven Spielberg's 2014 American comedy drama 'The Hundred-Foot Journey'.

Om Puri had delivered some stellar performances in mainstream commercial Pakistani, Indian and British cinema apart from making a dent in Hollywood with his roles in 'East is East', 'City of Joy', 'Gandhi' and 'The Reluctant Fundamentalist'. He was nominated for the Best Actor BAFTA for 'East is East' in 2000.

The actor also received an honorary OBE in 2004 for his contribution to British cinema.

On the personal front, Om Puri's first marriage to Seema Kapoor, the sister of actor Annu Kapoor, in 1991, did not last long.

After they broke their 8-month long marriage, Puri tied the knot with journalist Nandita Puri in 1993. The actor has a son named Ishaan with Nandita.