A possible contender to replace Justice Antonin Scalia on the US Supreme Court is an Indian-origin American appeals court judge is Sri Srinivasan, who has an impressive resume and has shown pro-business leanings. 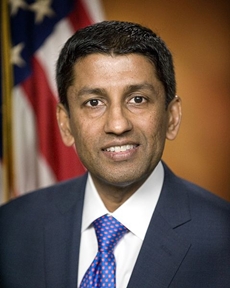 If he were nominated his background may make it more politically challenging for Republicans, who plan to block anyone put forward by President Barack Obama, to oppose him.

Srinivasan, 48, has served on the US Court of Appeals for the District of Columbia Circuit - the second most powerful court of the United States - since he was confirmed on a 97-0 bipartisan vote in the US Senate in May 2013, becoming the first South Asian American to serve as a circuit court judge in American history.

Republican senators who supported him then would likely be asked to justify why they couldn't back him for the Supreme Court.

Many names are likely to be under consideration and the White House has not tipped its hand, but recent Supreme Court appointments have tended to be appeals court judges and the appeals court in Washington on which Srinivasan serves has often been a springboard to the top court.

Republicans have called for Scalia's seat to remain open so that the next president, who would take office in January 2017, can nominate a replacement.

Other judges Obama could consider appointing include Paul Watford, a black who serves on the 9th US Circuit Court of Appeals, and Jacqueline Nguyen, a Vietnamese-American woman who serves on the same court as Watford.

Little is known about Srinivasan's views on divisive social issues like abortion and affirmative action. But as a senior Justice Department lawyer in 2013, he was part of the legal team that successfully urged the high court to strike down the Defense of Marriage Act, a law that restricted the definition of marriage to heterosexual couples for the purposes of federal benefits. The ruling helped pave the way for the court's ruling in June 2015 that legalized gay marriage nationwide.

In private practice, prior to his appointment to the appeals court, Srinivasan successfully represented former Enron Corp chief executive Jeff Skilling in a Supreme Court case. The Supreme Court narrowed the reach of the so-called honest services fraud law, invalidating one theory used by prosecutors for Skilling's conspiracy conviction and ordering further appeals court review. Despite the high court ruling, Skilling's conviction was later upheld by an appeals court.

Srinivasan also represented Exxon Mobil Corp in a lawsuit alleging human rights abuses in Indonesia, and mining giant Rio Tinto in a similar case about its activities in Papua New Guinea. Both cases concerned in part whether a law called the Alien Tort Statute allows such cases to be heard in US courts. The Exxon case is still ongoing. The Rio Tinto lawsuit was dismissed.

His work during two stints with the O'Melveny and Myers law firm prompted expressions of concern from liberal groups and unions that normally back Democratic judicial nominations when he was nominated to the appeals court in 2012.

He has had a lengthy career in public service, serving in the Justice Department during both the Obama and George W Bush administrations. Under Bush he had a junior role, while under Obama he was a political appointee serving as the top deputy to the solicitor general.

Srinivasan was born in Chandigarh, India and grew up in Lawrence, Kansas, where his father was a professor at the University of Kansas. If appointed, he would be the first Indian-American to serve on the Supreme Court.

He played basketball in high school and then attended Stanford for undergraduate, business and law degrees, yet never lost his allegiance to the University of Kansas Jayhawks. That was a theme of the judicial dignitaries that saluted him at his 2013 investiture for the appeals court, as was the fact that when he was an advocate before the Supreme Court, he carried in his pockets for good luck the socks his twin son and daughter wore when they were newborns.

Srinivasan's bipartisan credentials are lengthy. He was a law clerk to Supreme Court Justice Sandra Day O'Connor, now retired, a 1981 appointee of Republican President Ronald Reagan, who described him as  ''fair, faultless and fabulous.''

At Srinivasan's confirmation hearing, he was backed by conservative Texas Republican Senator Ted Cruz, who is now running for president.

"We have been friends a long time, so I am hopeful that our friendship will not be seen as a strike against you by some," Cruz, who is known for having tense relationships with Senate colleagues, joked at the time.

A spokesman for Cruz said the senator would not be commenting on any possible Obama nominee, reffirming that Cruz believes the nomination should be left to the next US president.