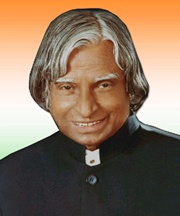 The nation bid adieu to its revered former President and Bharat Ratna APJ Abdul Kalam in Rameswaram who was laid to rest with full military and state honours, with all top dignitaries, including Prime Minister Narendra Modi, chief ministers  and representatives from various states and the three services chiefs, in attendance.

Thousands of people shouted slogans "Bharat Mata ki Jai" as Dr Kalam's body was taken in a carriage covered with flowers to the burial site near the Kalam's ancestral home in Rameswaram.

At the Pei Karumbu ground, Prime Minister Narendra Modi saluted Dr Kalam's body, which was wrapped in the Indian Tricolour, before the last rites. The PM then walked around the dais with Dr Kalam's body, with folded hands.

The mortal remains of 83-year-old Kalam, who collspsed while delivering a talk at IIM Shillong on Monday, was taken from the house around 9.30 am to the mosque by the personnel of three services with the casket covered with traditional green shawl.

Thousands of young and old mourners from all over the country had descended on the island town of Rameswaram to pay their last respects, having walked down the highway into Rameswaram or in buses and trains, with many having travelled to the temple town by boats.

The streets were packed as Dr Kalam's body was taken from his ancestral home to a mosque in a casket covered with a traditional green shawl, carried by personnel of the three services.

In fact, a large number of mourners kept pouring through the night from far and near to catch a last glimpse of the departed. Many people who came from far away places even slept on the roads last night.

Police maintained tight security arrangements in and around the town and Navy, Coast Guard and marine police personnel deployed in the sea.