Omar Sharif, star of `Lawrence of Arabia', dies at 83 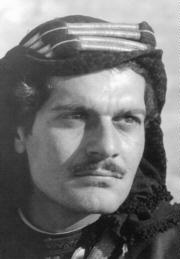 Omar Sharif, the Egyptian-born movie actor who shot to Hollywood fame through films like `Lawrence of Arabia' and `Doctor Zhivago' died early today at a Cairo hospital. He was 83.

Omar Sharif's agent, Steve Kenis, confirmed the death and said the cause was a heart attack. Sharif had been diagnosed with Alzheimer's disease in May this year, reports citing one of his sons said.

With his rugged looks and soulful appeal, liquid brown eyes, cleft chin, brilliant, gap-toothed smile and a rakish mustache, Sharif quickly found a place for himself in the thriving Egyptian film industry as well.

Born into an affluent family with Lebanese and Syrian roots, Sharif was also a bridge champion and consummate playboy.

Sharif developed an affinity for acting at an English-style private school in Cairo modeled on Eton.

He caused a sensation in one of his first movies, `The Blazing Sun' (1954), in which he kissed 23-year-old Faten Hamama, a popular Egyptian actress, who had a reputation for unsullied beauty. They wed the next year after he converted from Greek Catholicism to her Islamic faith and they remained one of the most glamorous couples of Arab cinema for years.

It was British director David Lean who cast him as tribal chief Sherif Ali in `Lawrence of Arabia' (1962), an epic about the British adventurer TE Lawrence and his efforts to unite Arab tribesmen against the Ottoman Empire during World War I.

The film also created another star of the previously obscure Peter O'Toole in the title role. 5the film was a big commercial success and won seven Academy Awards, including best picture and best director.

Sharif collaborated again with Lean as the title character in `Doctor Zhivago' (1965), based on Boris Pasternak's novel about an idealistic physician-poet amid war and revolution in early 20th century Russia.

Sharif, who spoke English, French, Spanish, Italian, Arabic and Greek, continued to play strong, masculine roles across the ethnic spectrum - an Armenian king in `The Fall of the Roman Empire' (1964), the title conqueror of `Genghis Khan' (1965) and a Yugoslav patriot in `The Yellow Rolls-Royce' (1965) and so on.

Omar Sharif, a name he adopted for the movies, was born Michel Demitri Shalhoub on 10 April 1932, in the seaport of Alexandria. He grew up in Cairo, where his parents were part of a social circle that included King Farouk, a cardplaying companion.

At the age of 10, Sharif's mother sent him to a private school, mostly because he was chubby, he told the London Guardian. ''My mother, who didn't speak any English at all, said: 'I know, the only thing is to put him in an English boarding school. The food will be so horrible that he'll lose his weight.' ''

The school also had a theater, which piqued his interest in dramatics. After graduation, he played billiards and professional soccer and spent a brief, miserable spell working for his father's precious-wood business. That chanced an audition for a film under the direction of a friend and starring Hamama.