The Red Sari tells us just who Sonia Gandhi is

When in doubt, ban. Or at least find a way to suppress. That seems to be the ethos of our times. The current government seems to be on a banning spree, but the UPA was fairly good at the game too, as Javier Moro found out.

The Spanish author set out to write a book on Sonia Gandhi and initially ran into a wall - no one would talk to him when he mentioned who his subject was. When it came out in Spain, no one in India was any the wiser but once the Italian translation appeared, the Congress, which was in power at that time, got into action.

The party's legal bigwigs (and there are several of them) wrote to him and frankly informed him he would be in trouble if he went ahead. In typical style, their objections were vague and quite possibly, they had read it closely.

Eventually, a compromise of some sorts was worked out and it is now called ''A dramatized biography.'' In this case, it means reconstructing conversations and adding colour, based on interviews with eyewitnesses and those who are in the know, somewhat like the new journalism of Truman Capote and Tom Wolfe.

The overall effect works in parts, but raises questions in others, since it delves into the minds of key dramatis personae which brings it uncomfortably close to fiction.

The book was not found in Indian bookshops for many years but soon after the government changed Roli Books got into action and now The Red Sari is all over the place and by all reports, doing quite well, thank you.

The first response after reading would be - why on earth did the Congress want to keep it out of India? What was so sinister or ugly in it that the party loyalists wanted to ensure that the people of India did not get to know about?

Did it contain some explosive disclosure about Sonia Gandhi's past? Because this is a book that should have been printed it in large numbers and distributed (in several translations) all over India.

It is a sensitive portrayal of this most enigmatic lady but also humanises her, showing her to be a sentimental, vulnerable and a kind-hearted person who is shy and has dealt with the many vicissitudes of her life with great fortitude and courage.

It dispels the popular notions about Sonia as being a cold, calculating politician and instead presents a picture of a bahu (daughter in-law), wife and mother who simply melded her own life and personality into that of the Gandhi family. 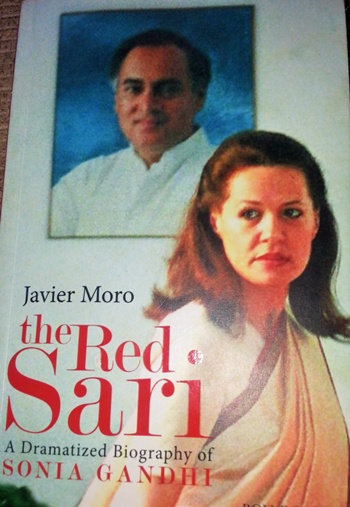 At the wedding, done in a simple style, she wears the khadi sari (which is actually pink) which was woven by Nehru in jail and also worn by Indira Gandhi during her wedding: ''(But) for Sonia the sari was much more. It marked the first step in the process of her Indianisation.''

Just before the wedding, asked by a reporter if she would live in India, she said, ''With Rajiv, I would go to the ends of the earth.'' Indians don't need Moro's book to tell them that she has lived here and almost totally Indianised herself; but for her ''inner voice'', she would have been the prime minister of the country.

But it is the first half of the book that a reader would really find interesting. Written in a pacey, romantic novel style, it details her upbringing as a daughter of a humble mason in Italy, her life in a boarding school, her teenage years and then Cambridge, where she went to study English and was introduced to a handsome Indian boy who she would fall in love with.

Moro tracks down friends from the past as also the man who introduced the two, who provides the small, colourful details of their budding romance. Moro writes: ''When Rajiv took her hand as they were walking in the shade of the ancient walls of the cathedral, Sonia had no strength to pull it back. The warm, soft hand transmitted a feeling of immense safety and pleasure. She could not pull her hand away.'' We have not ever known of Sonia Gandhi like this.

For those interested in Sonia Gandhi beyond the headlines, this is a book to pick up. Reader discretion is advised, since there is no way to confirm the veracity of so many things, even if he has managed to get people like Usha Bhagat, Indira Gandhi's one time secretary, to talk.

But in the absence of any other writing on this most intriguing of political personalities and in a situation where the image is so closely controlled and managed by the Gandhis and their acolytes, Moro's book remains our only reference.

See: Interview with Javier Moro, author of The Red Sari

An excerpt from The Red Sari