Mick Davis, the former head of mining giant Xstrata, is among those interested in bidding for Anglo American's copper mines in Chile. 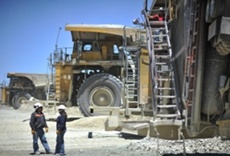 London-based Anglo American had in June announced that it was planning to sell off a few assets at several sites, but did not reveal which would be put up for sale.

Anglo American, run by CEO Mark Cutifani, plans to sell some under-performing assets, including three Chilean copper mines and a smelter, according to weekend report from The Wall Street Journal, which cited a person familiar with the matter as saying.

Anglo American plans to raise at least $1 billion from the sale of the Mantos Blancos, Mantoverde mines, along with its stake in the El Soldado mine and the Chagres smelter in Chile and focus on its larger copper operations at Los Bronces mine and Collahuasi.

X2 is reported to have raised around $5 billion from several investors, mainly for acquisitions.

Among the other firms who have shown early interest are London-based investment QKR Corp. and Toronto-based Magris Resources Inc, the report said.