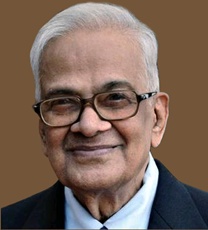 Kamath was the Washington correspondent of The Times of India from 1969 to 1978 and later the editor of the Illustrated Weekly of India. He was also one of the earliest biographers of Prime Minister Narendra Modi.

He had been ailing for sometime due to age-related problems and was admitted to the hospital a few days ago. He breathed his last around 6.30 am on Thursday, his nephew Jairam Kamath said.

"He was suffering from spondylosis for some time," said Dr (Col) M Dayananda, medical superintendent and COO, Kasturba Hospital, Manipal.

Kamath was the honorary director of School of Communication, Manipal University since its inception in 1997. Kamath also celebrated his 93 birthday in the institute with the faculty and students last month.

Born on 7 September 1921 in Udupi, Karnataka, Madhav Vittal Kamath had his education in St Cecily's Convent, Christian High School, and Board High School in Udupi, and Government College in Mangalore. He got his degree in chemistry and physics from St Xavier's College in the then Bombay in 1941.

After graduating in science, he worked as a chemist for five years before switching to journalism.

He started his media career as a reported with Mumbai's venerable daily, the Free Press Journal, in 1946 and later worked for its eveninger, Free Press Bulletin. Later, he joined the Times of India Group and was the editor of The Sunday Times between 1967 and 1969. He was made the Washington correspondent of The Times of India, and worked there for nearly 10 years, before returning in 1978 to serve as the editor of the erstwhile Illustrated Weekly of India, till 1981.

After retirement in 1981, he opted to settle down in Mumbai and continued writing books and columns for various national and international publications, including his ''alma mater'', the Free Press Journal, till a fortnight before his death.

He was the honorary president and director of Manipal Institute of Communications, and a board member of Manipal University, a deemed university.

Kamath was awarded Padma Bhushan for his contributions to Indian journalism in 2004. He also penned over 40 books, including `Gandhi - A Spiritual Journey', `Reporter At Large', and co-authored `Narendra Modi - The Architect of a Modern State' (2009).

"A prolific writer and a fine human being, Shri MV Kamath's demise is a loss to the world of literature and journalism. May his soul rest in peace. My mind goes back to the several interactions I had with MV Kamath ji. He was a repository of knowledge, always full of humility and grace," the prime minister said.