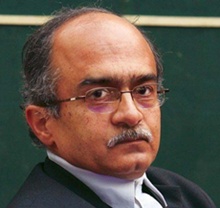 Bhushan also urged the PM to initiate disciplinary and even criminal action against Sinha for allegedly abusing his official position to protect those accused in the 2G spectrum and coal block allocation cases.

In his letter to Modi, Bhushan, who is appearing for two NGOs in the spectrum and coal block allocation cases, alleged that Sinha was ''acting in concert'' with the accused and trying to influence or derail the investigation/prosecution.

The letter, a copy of which was forwarded to home minister Rajnath Singh, said such ''misconduct'' was completely unbecoming of a senior officer holding the top post in the country's premier investigating agency, and sought criminal prosecution of Sinha under the Prevention of Corruption Act.

He said instances of Sinha's alleged misconduct were given in detail in the latest affidavit filed by him before the Supreme Court.

In his letter to the PM, Bhushan has referred to the issues raked up by him in the apex court relating to the "entry register" at Sinha's residence, which he claimed, showed that top executives of companies accused in 2G and coalgate met him frequently.

The lawyer has also raised the issue of Sinha's attempt to "interfere" with the probe of Aircel-Maxis deal and keeping at bay Santosh Rastogi, DIG from the 2G matters.

Sinha has denied the charge.

In the letter, he said, "When these facts came to light, Sinha got the CBI to issue a statement that these revelations are a lie and no such entry register exists.

"Later, he issued a statement that this is tantamount to an invasion of his privacy and he would sue the NGO, which has raised this issue before the Supreme Court in a PIL, for perjury.

"And then he issued a statement that some entries in the register are genuine while the others are forged. Finally he again changed his statement and stated that there is nothing wrong in meeting the accused," it said.

"It is important to take these actions urgently so that the dignity of the post which he is occupying could be restored and also the important corruption cases, which are being handled by the CBI under his supervision, could be saved from getting derailed," the letter said.