Celebrated actor Peter O'Toole, who made a smashing debut in David Lean's 1962 classic, Lawrence of Arabia died on Saturday. O'Toole was nominated eight times for the Best Actor Oscar in a career that spanned 44 years. 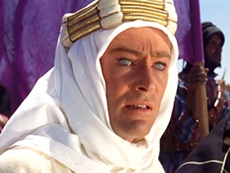 The actor had however, been offered and honorary Oscar in 2003, which he declined, on the grounds that he was ''still in the game and might win the lovely bugger outright'', but that did not happen.

According to commentators, the award for his very first role, would have been richly deserved, but the entrenched Hollywood clout of Gregory Peck, himself overdue an Oscar, in To Kill a Mockingbird was too hard to overlook.

Even so, the endearing charm of O'Toole's Lawrence endured, bringing him many of the best roles, as he went into his 30s and 40s.

He played Henry II twice, once with co-star Richard Burton in Becket (1964), then went on to play the same king at a cantankerous 50, opposite a 60-year-old Katharine Hepburn, in The Lion in Winter (1968).

Hepburn won an unprecedented tied Oscar with Barbra Streisand in Funny Girl, though O'Toole – despite winning the Golden Globe - perhaps came closest to the award, but lost it to Cliff Robertson in the now-forgotten Charly.'

O'Toole who overcame stomach cancer in the 1970s breathed his last at the Wellington hospital in London following a long illness.

His daughter Kate O'Toole said, "His family are very appreciative and completely overwhelmed by the outpouring of real love and affection being expressed towards him, and to us, during this unhappy time. Thank you all, from the bottom of our hearts."

Announcing last year that he would not be acting any longer, O'Toole said, "I bid the profession a dry-eyed and profoundly grateful farewell."

He said his stage and screen career fulfilled him emotionally and financially, and had brought him together "with fine people, good companions with whom I've shared the inevitable lot of all actors: flops and hits."

Michael Higgins, the president of Ireland, who was among the first to pay tribute said, "Ireland, and the world, has lost one of the giants of film and theatre."

"In a long list of leading roles on stage and in film, Peter brought an extraordinary standard to bear as an actor," Higgins said. "He had a deep interest in literature and a love of Shakespearean sonnets in particular. While he was nominated as best actor for an Oscar eight times, and received a special Oscar from his peers for his contribution to film, he was deeply committed to the stage.

"Those who saw him play leading roles on the screen from Lawrence in 1962, or through the role of Henry II in Becket, and The Lion in Winter, or through the dozens of films, will recognise a lifetime devoted to the artform of the camera.''