Describing Srikanth Srinivasan as a "trailblazer", US president Barack Obama today said he personified the best of the US and expressed confidence that the India-born legal luminary would serve as a judge in the second highest court of the country "with distinction". 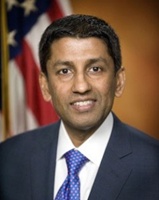 The nomination of 46-year-old Chandigarh-born Srinivasan to the US Court of Appeals for the District of Columbia Circuit was unanimously approved by the senate yesterday, with 97-0 vote.

With the confirmation, Srinivasan became the first South Asian to be appointed to the top court, even as speculation grew that he may one day be tapped for the Supreme Court.

"Sri is a trailblazer who personifies the best of America. Now he will serve with distinction on the federal bench," Obama said in a statement.

"Sri will in fact be the first South Asian American to serve as a circuit court judge in our history... Sri spent nearly two decades as an extraordinary litigator before serving as principal deputy solicitor general of the United States," Obama said.

Srinivasan was first nominated by Obama on 11 June 2012, and on 2 January 2013, his nomination was returned to the president, due to the sine die adjournment of the senate. His re-nomination by the president to the office came on 3 January 2013.

Senate judiciary committee chairman Patrick Leahy, hailed the appointment to what was considered as the top court of the country after the Supreme Court.

According to senator Mark R Warner, co-chair of the bipartisan Senate India Caucus, he was delighted with the unanimous confirmation.

According to commentators, the fact that an Obama nominee could be so quickly and completely embraced by Republicans was a testament to Srinivasan's bipartisan credentials. Current and former colleagues, as also family members and friends, describe him as a doting father, loyal friend, fanatical University of Kansas basketball fan and open-minded attorney who approaches every case without predisposition.

Irv Gornstein, executive director of the Supreme Court Institute at Georgetown University, who worked with Srinivasan in the Solicitor General's office and at the Washington law firm O'Melveny & Myers, said he was attracted to persuasive arguments, regardless of their source.

Walter Dellinger, a former acting solicitor general under president Bill Clinton said Sri was undoubtedly considered one of the best three or four Supreme Court advocates in the country. He added, the first time Srinivasan argued a case before the high court, he took a single sheet of paper to the podium so he would not appear overconfident. That sheet was blank, he said.