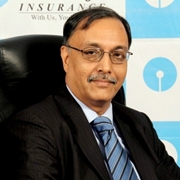 Atanu Sen has taken over as managing director and CEO of SBI Life Insurance from M N Rao, who retired on 31 August 2012.

A  post graduate in economics from Calcutta University, Sen started his career with SBI in 1977 as a probationary officer. During his tenure spanning over 35 years, he has held several key assignments in various circles of the bank including at its Frankfurt office.

Sen has also held the key position of chief general manager in the Mumbai Circle of the Bank being responsible for the banks' business in the state of Maharashtra and Goa which has more than 1200 branches under his jurisdiction.

His last held assignment was as deputy managing director and chief credit and risk officer of State Bank of India.