The Indian rupee hit a new record low of 70.55 against the US dollar, as the Indian currency extended its plunge, after falling 25 paise to hit a closing low of 70.16 a dollar on Tuesday. 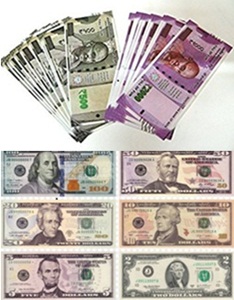 The rupee opened lower from its previous close at 70.32-32 a dollar on the Interbank foreign exchange market today and was down still at 70.40 a dollar.
Around 12.30pm (India time) the rupee plunged to a record low of 70.55 against the greenback.
Against the UAE dirham, the rupee was trading at 19.20 at 12:00pm (UAE time), according to XE.com.
On the other hand, the equity markets showed a buoyant trend after benchmarks Sensex and Nifty scaling new peaks on Monday, showing their highest single-day gains in nearly five months. Equities remained firm on Tuesday as well.
The rupee had, on 16 August, tumbled to an intra-day low of 70.40 a dollar before closing at 70.15 per dollar
Hit by a range of negative factors, including swelling current account deficit, surging global crude prices and declining export growth amidst protectionism all around, the rupee remained volatile for most part of the current year.
The rupee had moved down from 64 to a dollar to 70 a dollar over the past five to six months.
The rupee fall is intriguing since it lost to the dollar despite the fact the US currency was weighed down after US-Mexico trade deal aimed at overhauling the earlier NAFTA.
Official data showed foreign direct investment in India grew by 23 per cent to $12.75 billion during the April-June quarter of 2018-19. A PTI report said that the foreign fund inflows would help finance the current account deficit (CAD) which is expected to widen to 2.8 per cent of the GDP in 2018-19.
MORE REPORTS