3:30 pm Market Closing: Benchmark indices closed off the day's high while the broader markets were under pressure on correction in shares of banks and companies having debt concerns.

About two shares declined for every share rising on the BSE.

Nifty Midcap as well as PSU Bank indices were down 1 percent each.

3:25 pm Analysts on Sun Pharma: Brokerage houses are not positive on Sun Pharmaceutical Industries after its disappointing Q3 earnings and expect the stock to fall up to 25 percent over next 12 months. The stock fell as much as 1.6 percent in early trade, then gradually recovered to gain up to 1.8 percent.

3:12 pm Gold Update: Sugar prices spurted by Rs 100 per quintal at the wholesale market in the national capital today following immense buying by stockist and bulk consumers amid halt in arrivals from mills.

Marketmen said heavy offtake by stockist and bulk consumers, triggered by tight supplies from mills resulted in a sharp strength in sugar prices.

Sugar prices have been almost climbed up around 15-20 percent since the announcement couple of measures by the government.

The government has increased the import duty to 100 per cent from 50 per cent and limiting the release of sugar by the mills.

Retail prices are also asked higher at Rs 38-42 per quintal.

This is the sixth facility which will provide better access to northern and western markets in India, the company statement said.

"India continues to be a high-growth market for AkzoNobel and the launch of the new powder coatings facility will only further strengthen our manufacturing footprint in the country," AkzoNobel NV CEO Thierry Vanlancker said.

2:57 pm Market Update: Benchmark indices were off day's high in trade, but the Midcap and PSU Bank indices extended losses.

2:32 pm PNB in action: PNB shares extended losses to over 9 percent while the management giving clarification on its transaction fraud worth Rs 11,333 crore wherein involves Nirav Modi Group and other PSU banks also. 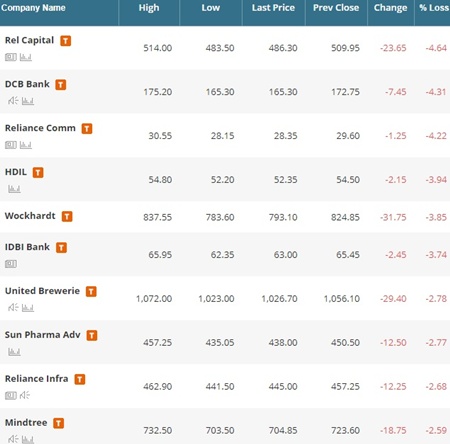 Silver also spurted by Rs 720 to Rs 39,970 per kg backed by increased offtake by industrial units and coin makers.

Bullion traders attributed the rally in gold to a firm trend overseas as the dollar weakened, raising demand for the precious metal as a safe haven.

Enforcement Directorate is likely to soon get in touch with other banks involved.

1:50 pm Earnings: TVS Srichakra shares declined half a percent despite profit in Q3 increased 8.7 percent to Rs 31 crore and revenue grew by 8.5 percent to Rs 492.7 crore compared to year-ago.

The pan-European Stoxx 600 was up around 0.38 percent shortly after the opening bell, with most sectors and major bourses in positive territory.

1:25 pm Market Update: Benchmark indices were off day's high in afternoon, with the Sensex trimming gains to 216.11 points from 350 points earlier.

The Nifty Midcap and BSE Smallcap indices slipped half a percent each on weak market breadth. About three shares declined for every two shares rising on the BSE.

About 1,405 shares declined against 1,180 advancing shares on the BSE.

12:47 pm Market Update: Benchmark indices extended rally on the back of positive global cues. The Sensex gained more than 250 points and the Nifty is inching towards 10,600 levels.
However, Midcap and Smallcap indices were mildly lower.

12:33 pm Order Win: The construction arm of Larsen & Toubro has won orders worth Rs 1,585 crore, including Rs 513 crore worth of order by transportation infrastructure business and Rs 500 crore by power transmission and distribution segment.

Official sources said the agency sleuths swooped down on at least ten premises of entities involved in the case early morning.

The premises raided by the ED here include Modi's residence in Kurla, his jewellery boutique in Kala Ghoda area, three company locations in Bandra and Lower Parel, three premises in Surat in Gujarat and Modi's showrooms in Chanakyapuri and Defence Colony in Delhi.

The ED had filed a case under the Prevention of Money Laundering Act (PMLA) after going through a CBI FIR registered early this month.

It is understood that the ED also went through the PNB complaint that was made out against Modi and others.

The agency, they said, would probe if the allegedly defrauded bank funds were laundered and these proceeds of crime were subsequently used by the accused to create illegal assets and black money.

The CBI had booked Modi, his brother, wife and a business partner for allegedly cheating PNB of over Rs 280.70 crore in 2017.

12:01 pm WPI inflation: Wholesale Price Index inflation eased to 2.84 percent in January, from 3.58 percent in previous month. It was also lower than a CNBC-TV18 poll estimates of 3.13 percent.

The US bond yield on the 10-year Treasury note jumped to 2.92 percent, its highest level since January 2014, said a report. Treasury yields rose after the government reported inflation in January rose by more than expected.

''It is not really negative for markets in general and historically what we have seen is that if the rise in interest rates in tandem with growth, it is not that much of a problem. If there is no growth and interest rates rise that would prove to be extremely detrimental,'' he said.

11:50 am Buzzing: Shares of Punjab National Bank extended its fall for the second straight session, falling as much as 9 percent after the lender said it has detected a USD 1.77 billion fraud. It had slumped 10 percent in previous session.

The state-owned bank said it had detected a USD 1.77 billion (about Rs 11,400 crore) fraud in which billionaire jeweller Nirav Modi allegedly acquired fraudulent letters of undertaking (LoUs) from one of its branches for overseas credit from other Indian lenders.

PNB has suspended 10 officers over the scam and referred the matter to CBI for investigation.

While PNB did not name other lenders, Union Bank of India, Allahabad Bank and Axis Bank are said to have offered credit based on LoUs issued by PNB. 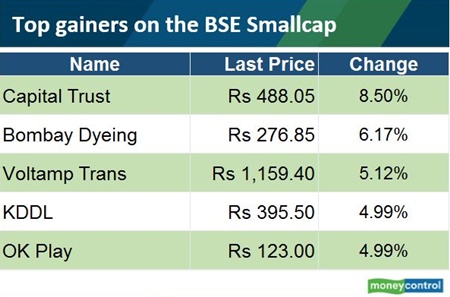 11:22 am ED raids offices of Nirav Modi, PNB, Gitanjali gems: The Enforcement Directorate is currently conducting raids at the residence and offices of Nirav Modi and PNB, reports Moneycontrol's Tarun Sharma. The ED had earlier registered money laundering case against Nirav Modi and others in connection with the scam. Proceedings have begun against officials named in the FIR. According to CNN-News18 Nirav Modi left India before PNB FIR.

11:08 am Housing Project Launch: Mahindra Lifespace said it has announced the product launch of Happinest - Palghar - the first affordable housing project to be undertaken by a joint platform between the company and HDFC Capital Affordable Real Estate Fund-1.

11:02 am Technical Outlook: Dharmesh Shah of ICICIdirect believes that index will continue to consolidate in a broad range of 10,600-10,300 amid stock specific action, before taking a further directional move.

Going ahead, only a decisive close above 10,600 would open up room for further upside. Whereas, intermediate support remains around 10,300.

10:55 am Buzzing: Shares of Nestle India rose more than 5 percent on the back of strong fourth quarter results.

10:45 am Earnings Reaction: Shares of Infibeam Incorporation gained 6 percent on the back of strong Q3 performance.

The company board approved issuance of convertible warrants up to Rs 40 crore to Network18.

10:32 am Axis Bank clarification: Axis Bank, in a BSE filing, confirmed that through overseas branches in the past, it had undertaken such transactions with PNB against their authenticated SWIFT LOUs but it had sold down all the referred transactions.

In the normal course of trade business, Axis Bank said, through its overseas branches, it undertakes transactions against letters of undertakings (LOU) issued by other banks. These amounts are then credited to the LOU issuing bank's Nostro accounts.

Axis Bank had discounted bills of over Rs 2,000 crore against PNB's LoUs, according to CNBC-TV18 report quoting sources.

10:17 am Buzzing: Shares of Gitanjali Gems plunged up to 19 percent after the company came under scanner of various investigating agencies following the Punjab National Bank's declaration of nearly Rs 11,400-crore fraud.

Punjab National Bank (PNB) yesterday disclosed that it has detected some fraudulent transactions with financial implication of USD 1.77 billion (about Rs 11,346 crore) and the matter has been referred to law enforcement agencies for the recovery.

About 1,337 shares advanced against 833 declining shares on the BSE.

9:50 am Oil Update: Oil prices extended gains from the previous session, pushed up by a weak dollar and by comments from Saudi Arabia that it would rather see an undersupplied market than end a deal with OPEC and Russia to withhold production.

US West Texas Intermediate (WTI) crude futures were at USD 61.39 a barrel, up 77 cents, or 1.27 percent from their last settlement, adding to a 2.4 percent gain in the previous session.

9:40 am Rupee Trade: The rupee gained another 14 paise to trade at a two-week high of 63.95 against the US dollar in morning on dollar selling by exporters and banks amid firm equities.

The dollar's weakness against other currencies overseas also supported the rupee sentiment, a currency dealer said.

The moved between 63.98 per dollar and 63.93 per dollar at the interbank forex market in early trade.

The dollar fell further against the yen to hit a 15-month low in Asian trade while the euro gained after a firm German growth.

Yesterday, the rupee had gained 23 paise to close at 64.09 a dollar on sustained selling of the American currency by exporters and banks.

"The Board of Directors today accorded final approval for issuance of equity shares for an amount not exceeding Rs 3,500 crore by way of QIP to the eligible investors," Idea said in a regulatory filing.

The floor price in respect of QIP, based on pricing formula, has been fixed at Rs 86.84 per share, it said in another filing.

The company may give a discount of up to 5 percent on the floor price in the QIP, it added.

On January 4, the Board had approved a proposal to raise up to Rs 6,750 crore. The company has already raised Rs 3,250 crore by allotment of shares to entities of promoter Aditya Birla Group (ABG).

9:21 am Earnings Reaction: Leading cloud computing player 8K Miles Software Services reported a 67 percent growth in net profit at Rs 44.80 crore for the three months to December, while it revenue grew 58 percent to Rs 224.46 crore. The stock was down 1 percent.

After leveraging its success in the US, the company is expanding across Europe and Asia in both public and private sectors, the company said.

"We are very bullish about our platforms as CloudEz and Automaton are seamlessly extensible to address local regulatory compliances globally. It's important now to drive innovation faster and provide new ways of delivering care for patients across the globe," Suresh Venkatachari, chairman and managing director of 8K Miles said.

9:15 am Market Check: Benchmark indices as well as broader markets gained around half a percent each, following positive lead from global peers.

About three shares advanced for every share falling on the BSE.