More reports on: Technology, In the news 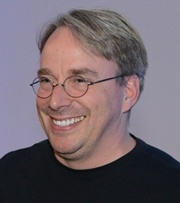 Linux founder Linus Torvalds has said that artificial intelligence (AI) was nothing to fear, making light of remarks from the Elon Musk, Stephen Hawking and Steve Wozniak.

Torvalds made his views on AI clear when a Slashdot user quizzed him as to whether he thought it would be a "great gift" to mankind or a potential danger.

Dismissing Wozniak's recent claims that humans would become the pets of robots when they took over the world (See: Apple co-founder Steve Wozniak says humans will become robot pets), Torvalds said, "We'll get AI, and it will almost certainly be through something very much like recurrent neural networks.

"And the thing is, since that kind of AI will need training, it won't be 'reliable' in the traditional computer sense. It's not the old rule-based prolog days, when people thought they'd 'understand' what the actual decisions were in an AI.

"And that all makes it very interesting, of course, but it also makes it hard to productise. Which will very much limit where you'll actually find those neural networks, and what kinds of network sizes and inputs and outputs they'll have.

"So I'd expect just more of (and much fancier) targeted AI, rather than anything human-like at all - language recognition, pattern recognition, things like that.

The past few months had witness some of the most famous scientists and engineers - including Stephen Hawking saying artificial superintelligence was one of the biggest threats to humanity. However, according to Torvalds their fears were idiotic.

He said ''targeted AI'' would do things like language translation or scheduling, adding basically, these would just be ''fancier'' versions of apps like Google Now or Siri.

He added, they would not, however, be cybergods, or even human-equivalent forms of intelligence.

As regards the prospect that AI might usher in a singularity, whereby computers experienced an ''intelligence explosion'' and figured out how to produce any object we could desire, in infinite amounts, Torvalds remains sceptical, "The whole 'Singularity' kind of event? Yeah, it's science fiction, and not very good Sci-Fi at that, in my opinion. Unending exponential growth? What drugs are those people on? I mean, really."