Flipkart to raise another $1 bn; eyes over $10 bn valuation

Flipkart, India's largest e-commerce company, is looking to raise funds to the tune of $1 billion – in a third round of fund-raising – which would take the company's market valuation to over $10 billion. 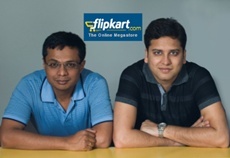 Flipkart promoters Sachin and Binny Bansal are dreaming big as they attempt to position the company in a dominant position in response to rivals raising the size of their war chests.

Flipkart is reported to be planning to raise up to $1.5 billion, to take its valuation to over $10 billion.

Wall Street investment firm Tiger Global, a fervent backer of Indian internet startups, has been the largest stakeholder in Flipkart and its stake of about $700 million is expected to cross $1 billion, surpassing its investment in Facebook.

The Bangalore-based e-tailer is already in the top tier of privately-held internet ventures globally, that also include startup superstars like taxi-hailing smart phone app Uber, Airbnb and Dropbox, among others.

The new funding would value Flipkart at 2.5 to 2.7 times its annualised revenue. Flipkart is expected to close the current financial year with a revenue topping $4 billion.

The latest financing round, which is expected to close in the next 45 days, would take the amount of funds that Flipkart has raised so far in three rounds to around $2.5 billion. (See: Flipkart raises $160 mn in funding, valuation rises to $1.5 bn and Flipkart raises $1 billion fresh capital)