Star Union Dai-ichi Life Insurance Ltd (SUD Life), one of the new players in the Indian life insurance market, said on Tuesday it expects to more than double premium income in January-March quarter with structured products for corporate clients. 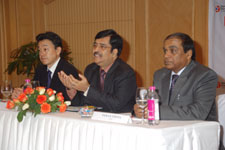 Speaking at the launch of new products in Mumbai, K Sahay, chief executive officer of SUD Life, said, ''We plan to reach the level of Rs600 crore through underwriting of business by the end of the fiscal'' from the present Rs240 crore.

The insurer, which began operations in February 2009, is 51-per cent owned by Bank of India, 23 per cent by Union Bank of India and 26 per cent by Japan's Dai-ichi Mutual Life Insurance Co.

It has also tied up with Central Bank of India to offer annuity to reverse mortgage, Sahay said. "Corporate plans will help us grow our income as the year-end (fiscal) approaches," he added.

The insurer has kept a target to break even in the next four years, he said, adding it has underwritten 71,000 policies so far. The company currently distributes its policies through 5,700 branches of its Indian founders, he said.

The insurer has a paid-up capital of Rs250 crore. "We do not need additional capital to grow till the next fiscal," Sahay said. The company's solvency ratio currently stands at between 6.5 per cent and 7 per cent against the industry average of 1.5 per cent, he added.