Is TV coverage of climate change too focused on disaster?

A study of how television news covered three reports by the Intergovernmental Panel on Climate Change (IPCC) during 2013 and 2014 shows that news bulletins tended to focus most on past or potential disaster in their narration of the story. 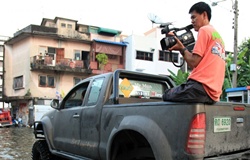 TV news bulletins also gave much less air time to other potential focuses – the uncertainty surrounding climate change, the opportunities it presents and the explicit risks it presents, says the study published by Reuters Institute for the Study of Journalism (RISJ) at Oxford University.

Similarities and differences were examined between the six countries - Australia, Brazil, China, Germany, India and the UK. The researchers found that references to disaster appeared prominently in both the story and in the headlines. Even though the IPCC had strongly emphasised 'risk management' in its communication efforts, risk was hardly mentioned.

Study author James Painter says, "It is not surprising that television does not do much on risk. Television needs pictures and strong engaging narratives to attract audiences. Disasters are full of them, while risks are more difficult to explain and harder to turn into stories."

The study also finds there were important variations in how much attention the television channels paid to climate sceptics and the 'warming pause' (the lack of a significant rise in global average temperatures since 1998).

The BBC in the UK and ABC in Australia were the two channels of the six studied that gave coverage to the story about the 'warming pause'. Of the other four countries, there was only a brief mention on Jornal Nacional in Brazil. The UK was the only country to have a sceptic appear on screen in the bulletins monitored, although there was mention of 'sceptics' on Jornal Nacional in Brazil.

"Our results endorse the findings in other studies that show the strong presence of sceptics and sceptic discourses in 'Anglo-sphere' countries like Australia, the UK, and the USA, but much less presence in other countries," adds Painter.

The 2011 RISJ publication, Poles Apart, showed that climate scepticism was widespread in the print media in the UK and the USA, but virtually absent from Brazil, China, France, and India.

This new report, Disaster Averted?, is unusual in being one of the few pieces of research to examine television coverage of climate change. Television is still the most trusted and used source of news in most countries, says the report.

The researchers chose the most watched channels with some of the largest national audiences for an evening bulletin in each of the countries studied.

The six channels were ABC 1 in Australia; TV Globo in Brazil; CCTV-1 in China; ARD in Germany; Aaj Tak in India, and the BBC in the UK, whose combined audience was around 50 million.

The study also finds that while Australia, Brazil, Germany and the UK carried considerable coverage of the reports, China had just 40 seconds, and India no coverage at all.

The researchers categorised the coverage in four ways (disaster, uncertainty, opportunity, and explicit risk) in how the climate change story was presented.