Amid all the hoopla about India's rapid economic growth, there's a sobering piece of news - India was ranked 62nd among 74 emerging economies on World Economic Forum's Inclusive Development Index, well behind all its BRICS peers and even Pakistan, Bangladesh, Sri Lanka and Nepal. 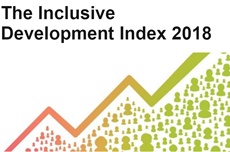 The WEF report, released on the eve of the Davos summit where India is expecting to play a major role, puts China in 26th position while Pakistan is 47th. Sri Lanka (40), Bangladesh (34) and Nepal (22) have also been ranked higher than India.

This year, Lithuania is ranked the world's most inclusive emerging economy, while Norway tops the advanced economy list.

On the brighter side, although India was ranked lower than Brazil and Russia, it was among the 10 emerging economies with 'advancing' trend.

The annual report noted that the incidence of poverty had declined in India over the past five years, but 6 out of 10 Indians still live on less than $3.20 per day.

"Given the prevalence of inequality both in terms of both income and wealth, there is substantial scope for improvement for India in this aspect. Both labour productivity and GDP per capita posted strong growth rates over the past five years, while employment growth has slowed. Healthy life expectancy also increased by approximately three years to 59.6," it said.

It reiterated that growth is a necessary but not sufficient condition for robustly rising median living standards. "Accordingly, policymakers and citizens alike would benefit from having an alternative, or at least complementary, bottom-line metric that measures the level and rate of improvement in shared socioeconomic progress."

It further said that slow progress in living standards and widening inequality have contributed to political polarisation and erosion of social cohesion in many advanced and emerging economies. "This has led to the emergence of a worldwide consensus on the need for a more inclusive and sustainable model of growth and development that promotes high living standards for all."

Globally, income inequality has risen or remained stagnant in 20 of the 29 advanced economies, and poverty has increased in 17. Most emerging economies have improved in these respects, with 84 per cent of them registering a decline in poverty, though their absolute levels of inequality remain much higher. In both advanced and emerging economies, wealth is significantly more unequally distributed than income. This problem has improved little in recent years, with wealth inequality rising in 49 of the 103 economies, the report added.

Meanwhile, a survey released by the international rights group Oxfam said the richest 1 per cent in India cornered 73 per cent of the wealth generated in the country last year. The report titled 'Reward Work, Not Wealth' also noted that 67 crore Indians comprising the population's poorest half saw their wealth rise by just one per cent.