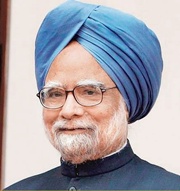 Former Prime Minister Manmohan Singh on Wednesday defended Reserve Bank of India Governor Urjit Patel before a Parliamentary committee on the issue of demonetisation. During the hearing, Singh told Patel it was not necessary to answer questions that may cause problem, reports The Economic Times.

Patel faced some tough questions from MPs as he could not set a time frame for the return of normalcy in the banking system.

However, the RBI governor informed the MPs that the central bank had replaced Rs9.2 lakh crore or 60 per cent of the demonetised currency.

Also, Patel could not put a definite number on the old Rs500 and Rs1,000 notes returned post demonetisation as RBI was still tabulating that.

Sources said the governor was spared a tough grilling at the meeting of Parliament's standing committee on finance as senior MPs including former Prime Minister Manmohan Singh intervened to say the RBI as an institution needs to be respected.

Congress MPs like Digvijaya Singh wanted Patel to be specific in his replies on lifting of cash withdrawal restrictions and wanted to follow through with tougher questions but was prevented by Singh and others, they said.

Patel, flanked by deputy governors R Gandhi and S S Mundra, explained to the members that discussions for demonetising high value currency notes between the government and the RBI had been going on since early 2016, and the central bank was in agreement with the government on the objective behind scrapping the old notes.

The committee headed by former union minister and senior Congress leader M Veerapa Moily had called the RBI and finance ministry officials to discuss the "demonetisation of Indian currency notes of Rs500 and Rs1,000 and the impact thereof".

As members could not complete their questions, the committee decided to call the RBI Governor and ministry officials again on a later date, most likely after Parliament goes on a break during the Budget session.

"He (Patel) replied in part but he could not answer main questions. How much money has come back into the system and by when will banks' operations be normal. It seems RBI officials were in very defensive position on demonetisation," a senior opposition member said after the meeting.

"The RBI Governor replied to some questions. But the process could not be completed. They would be called again," ET's sources said.