Govt offers to talk with protesting farmers without conditions

The centre has agreed to hold unconditional talks with farmers, to prevent vested interests seizing the initiative from farmers, after the protesting farmers rejected the government’s offer to advance talks if they relocated to a designated place, instead of scattering all over Delhi and its outskirts. 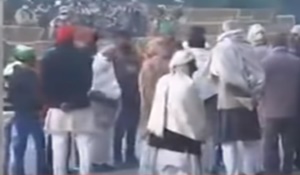 The decision was announced after home minister Amit Shah held a meeting with agriculture minister Narendra Singh Tomar and other senior leaders of his party at his residence.  The comes from the realisation that Burari Ground could become a Shaheen Bagh if the government continued to allow vested interests take gullible farmers for a ride.
In fact, both farmers and the central government have held a series of  parallel talks, reports said, adding that some leaders of the farmers’ unions have also been in touch with BJP leaders, following Shah’s offer to hold talks without conditions.
Months after Prime Minister Narendra Modi’s political detractors held the capital to ransom for days over what they claim anti-secular legislation by the Bhartiya Janata Party-led government at the centre, a new crop of protesters have descended on the capital demanding repeal of pro-farmer legislations.
After an initial plan to organise protests across states fizzled out, the anti-farmer lobby got some farmers to protest against the central government. But, with farmers not really willing to protest over a legislation meant to help them, they drew support from ever-ready Cong-Left-Jihadi alliance to add numbers. The protestors have set stage at the Nirankari Samagam Ground in north Delhi's Burari.
While around 400 protesters claiming to be affiliated to various groups and belonging to different states have assembled at the Burari ground, several others are still outside the boundaries of Delhi.
The aggrieved “farmers” who managed to reach Delhi’s Burari Ground were seen dancing around beating drums and with food and water provided by the kind souls of Bangla Sahib Gurdwara.
Viral videos showed how slogans such as ‘Dharti Mata Ki Jai’, ‘Narendra Modi Kisan Virodhi’ and ‘Inquilab Zindabad’ were chanted from different parts of the vast ground.
While some of the leaders of the disparate groups carrying flags in reds, greens and blues were busy addressing the crowd, others were seen dancing to drumbeats and the strains of ‘Hum Honge Kaamyab’.
The Akhil Bharatiya Kisan Sangharsh Samanvay Samiti members were chanting `Chahe Kuch Bhi Karlo Hum Badhte Jaenge’ – for what they seem to be not sure about.
The bone of contention is the centre’s farm legislation passed in September, which aims removing at trade barriers that do not allow farmers to sell their produce outside their traditional markets – a regulation that was meant to address food scarcities and to prevent hoarding and profiteering. Such a regulation only brought misery to farmers in times of bumper crops.
But, such a regulation helped middlemen and traders as they could corner farm produce at cheap rates and make a profit.
The protesters say the new legislation will render the APMC Act infructuous and weaken local market infrastructure.
These middlemen have been tutoring gullible farmers that the opening up of market is  a ploy by the central government to allow big corporates to enter the market and start dictating terms while the government will abandon is current procurement policy of procuring farm surplus at support prices.
Naturally, there is reason for farmers to be aggrieved.
The central government says that the laws are meant for farmers’ welfare - a view that farmers contest. They say the  laws will weaken the APMC system, leaving them vulnerable to corporate interests.
Also, the government is continuing with its procurement policy and, as reports say, has even crossed the target. PM Modi had made it clear that the MSP procurement policy will continue as usual.
Farmers owing allegiance to various farmers’ unions spearheaded by farmers from Punjab have been holding protests since earlier this month.
Amit Shah had issued a statement two days ago that his government was scheduled to hold talks with farmers on December 3, but that those talks could be advanced if protesters cleared roads and moved to a site the Centre had designated for themi.
“If farmers’ unions want to hold discussions before 3 December, then I want to assure you all that as soon as you shift your protest to the designated place, the government will hold talks to address your concerns the very next day.”
But, the organisers are not game – they won’t let farmers talk as the talks would then be focused on farmers only. The offer now stands rejected after Prime Minister Narendra Modi, in his monthly radio address Mann ki Baat, made it clear that the farm laws were intended to support farmers. The "agricultural reforms" have "unshackled" the farmers and given them "new rights and opportunities," he said.
Contending that the government is imposing conditions on the talks, the farmers said they would sit on the borders of Delhi for now. They said the government should unconditionally come forward to their terms of talks.
They are backed by Delhi’s ruling Aam Aadmi Party (AAP), led by Arvind Kejariwal, as if to gain political mileage out of it.
The surprise offer by union home minister Amit Shah has confused the protestors. Shah on Saturday said, “The government is ready to deliberate on every problem and demand of the farmers,” without any preconditions.
MORE REPORTS